Risk and insurance revenue up 12% for Jardine Lloyd Thompson

Jardine Lloyd Thompson Group PLC recently released its financial results for the first six months of this year, reporting a 3% drop, on a constant rate of exchange, of risk and insurance revenue in Canada. 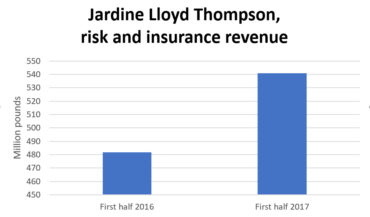 The British pound closed Friday at $1.63.

Risk and insurance revenue was up 3% on a constant rate of exchange basis, JLT stated.

JLT was formed in 1997 when Jardine Insurance Brokers merged with Lloyd Thompson.

“JLT Re has started the second half of the year strongly, despite the continued decline in property catastrophe rates,” JLT stated. “The July 1st renewal season saw good business retention and new business generation, giving the group confidence in the outlook for the new business.”

In 2013, Towers Watson & Co. agreed to sell its reinsurance and property and casualty insurance brokerage business to JLT for cash consideration of US$250 million. From that, JLT formed JLT Towers Re and later dropped the Towers name. Towers Watson merged in 2015 with Willis Group Holdings plc to form Willis Towers Watson plc.

“These results include the first contribution from Construction Risk Partners (CRP), which was acquired at the end of January 2017,” JLT said. “Organic revenue growth, which excludes the benefit of acquisitions, was 43%.”

JLT “remains confident that U.S. Specialty revenues will see a significant uplift in 2017 as a whole and that the business remains on track to turn to profits for the first time in 2019.”