Risk management continues to be an issue for major Canadian railways, the Transportation Safety Board of Canada (TSB) said Wednesday in an investigation report into a freight train collision in Alberta. 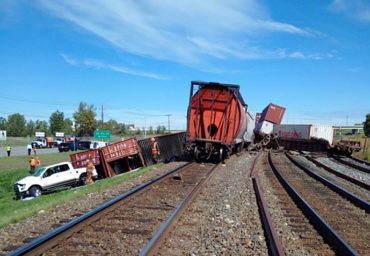 TSB’s report references an incident in which one Canadian Pacific Railway freight train rear-ended another in Calgary on Sept. 3, 2016. No one was injured. The accident took place on a section of track where CP had removed the centralized control system (CTC) in 2013.

The CTC is comprised of signals that give information such as speed limit to train operators. On the section of Calgary track where the 2016 collision happened, CP considered it a “non-main” track after removing the CTC. As a result, the signals no longer indicated whether another train occupied track ahead, TSB said Jan. 17, 2018.

CP has since re-installed CTC on that section of track.

Safety management systems (SMSs) in the transportation sector, including marine, pipelines, aviation and railways, have been on TSB’s “watch list” since 2010. Railways require SMSs, but TSB has been asking Transport Canada since 2014 to audit these more closely.

In a report released in 2014 into the Lac-Megantic, Que. derailment, TSB recommended that Transport Canada audit railway firms’ SMSs “in sufficient depth and frequency to confirm that the required processes are effective and that corrective actions are implemented to improve safety.”

Safety management was a major issue identified by TSB in its investigation into the July 6, 2013 accident, when 47 people in Lac-Megantic died after an unattended train hauling 72 crude oil tanker cars derailed. That tragedy also resulted in the destruction of 40 buildings and 53 vehicles plus a release of 6-million litres of crude oil.

In 2015, the federal government passed a law requiring railways hauling large volumes of dangerous goods to have $1 billion in insurance coverage, including third-party injury and pollution.