With Canadian companies facing the prospect of new tariffs for exports to the United States, the uncertainty over the North American Free Trade Agreement should be “front and centre” for risk managers, a KPMG expert told Canadian Underwriter Thursday.

“You hear a lot of discussion in the media about the potential for the United States to withdraw from NAFTA,” Russ Crawford, Vancouver-based national leader of NAFTA services for KPMG in Canada, said in an interview. “The highest likelihood is there will ultimately be a successful [re] negotiation of NAFTA. The question, is how long is it going to take?”

Risk managers should be modelling the effects of a delay in getting goods across the border and what happens if tariffs increase, Crawford said.

NAFTA, which took effect in 1994, eliminated tariffs on some goods sold among Canada, the United States and Mexico. It also provided for a dispute settlement mechanism. 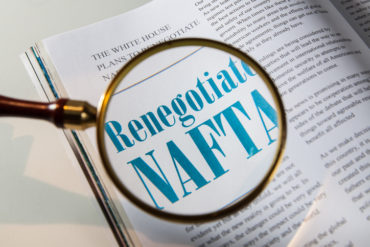 Officials from the three nations are renegotiating the deal.

On Thursday, U.S. President Donald Trump signed presidential orders that established a May 1 deadline, after which Canada and Mexico would face tariffs on steel and aluminum, The Canadian Press reported.

For risk managers at Canadian businesses exporting to or importing from the United States, the uncertainty over the future of NAFTA should be “a front and centre issue for them to be considering,” Crawford said.

On Wednesday, CP quoted Prime Minister Justin  Trudeau as saying Canadian officials are “working very, very hard and moving forward on trying to get a good deal,” in the NAFTA renegotiations.

“We know that there is a good deal eminently possible for Canada, for the U.S., and for Mexican citizen and workers,” Trudeau said on his way to a meeting of the federal Liberal caucus.

If the U.S. were to withdraw from NAFTA, there is uncertainty over how the process would actually work, Crawford told Canadian Underwriter.

A withdrawal would “most likely” not happen unless the U.S. Congress votes in favour of it. But there is “significant support” for NAFTA within Congress, he said.