Six of the ten ports with the highest potential insured loss from natural catastrophes are on the United States gulf coast, Risk Management Solutions (RMS) Inc. said in a release Monday. 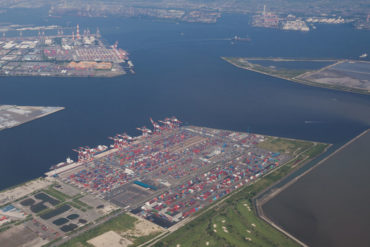 Newark, Calif.-based RMS ranked the top 10 ports in the world by greatest potential loss from catastrophes with a 500-year return period.

Ranked third was Plaquemines, La., south of New Orleans, with a potential loss of $1.5 billion due to hurricane and storm surge.

New Orleans and Pascagoula (about 150 kilometres east of New Orleans) have $1.018 billion and $1.014 billion in potential losses from hurricane and storm surge.

The figures are the 500-year estimated catastrophe loss for earthquake, wind and storm surge perils. RMS arrived at the figures using its new marine cargo model.

Beaumont, about 130 kilometres east of Houston, has about $900 million on potential losses from wind damage. The potential loss from a 1-in-500-year wind event in Baton Rouge is $804 million, while Houston has a potential port loss of $759 million due to hurricane risk. 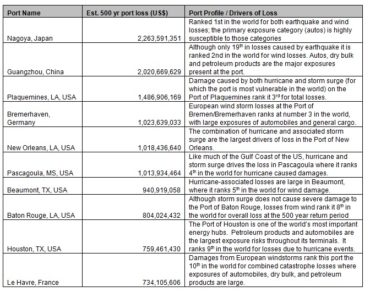 “The Port of Houston is one of the world’s most important energy hubs,” RMS stated. “Petroleum products and automobiles are the largest exposure risks throughout its terminals.”

“While China may be king for volume of container traffic, our study found that many smaller U.S. ports rank more highly for risk – largely due to hurricanes,” stated Chris Folkman, director of product management at RMS, in a release.