Rob Wesseling to become president and CEO of The Co-operators on Dec. 1

The Co-operators’ board of directors has announced that Rob Wesseling will become president and chief executive officer of the company, effective Dec. 1. 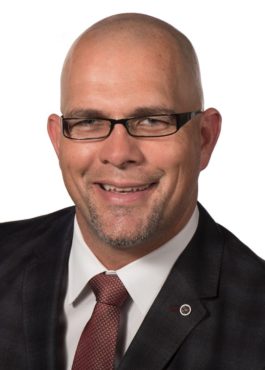 Currently the executive vice president (EVP) of property and casualty (P&C) operations for the Co-operators General Insurance Company and chief operating officer (COO) with The Sovereign General Insurance Company, Wesseling spent the last 19 years with The Co-operators in increasingly senior leadership positions, The Co-operators said in a press release on Tuesday. He was appointed COO of The Sovereign General in May 2007 and, in November 2011, he assumed the additional role of EVP, national P&C for all P&C operations across the group of companies.

Wesseling replaces Kathy Bardswick, current president and CEO of The Co-operators Group Ltd., who announced her retirement in February. Bardswick will be retiring Dec. 1, 2016 when Wesseling assumes the role.

Wesseling’s current involvements include his leadership in flood resiliency in Canada, The Co-operators said in the release. He has been instrumental in engaging all levels of government, the academic community and various industries, to develop a “complete solution for Canadians.” He is an acting member of the International Co-operative and Mutual Insurance Federation’s (ICMIF) board of directors and executive committee; member of the ICMIF’s development committee; and founding director and member of Partners for Action’s advisory board. He holds a B.A. with distinction in theoretical mathematics and MSc. of applied statistics from the University of Guelph, where he graduated in 1996. He obtained a Chartered Insurance Professional designation in 1999, the release added.

“Rob has the ability and desire to lead our organization while positively impacting the co-operative movement,” said John Harvie, chairperson of The Co-operators’ board of directors. “He’s an inspirational and innovative leader who will ensure The Co-operators relevance, strength and sustainability long term.”

Wesseling added that “we look to the future from a position of strength, recognizing that our relevance is dependent on our ability to anticipate and respond to their changing needs and preferences. I am eager to engage with the entire Co-operators team as we write the next chapters of the story.”

The Co-operators is committed to furthering its bilingual workforce and Wesseling is dedicated to enhancing his French language abilities, the release said. Prior to his post, Wesseling will relocate to Quebec where he will be fully immersed in a French language program for approximately eight weeks. “The leadership team will be developing a more detailed transition plan in the coming weeks,” the company said.

With more than $44 billion in assets under administration, The Co-operators Group Ltd. is a Canadian co-operative that offers home, auto, life, group, travel, commercial and farm insurance, as well as investment products through its group of companies.

More News
Related
The Co-operators acquires Assurance Aubin Insurance Brokers Ltd.
44% of The Co-operators’ claims and benefits in 2016 were for property damage, the company’s inaugural integrated report says
One Alberta brokerage and two from Ontario join BrokerLink
This week in P&C employment changes