Some rogue fishing vessels able to get insurance, research from University of British Columbia finds

Rogue fishing vessels, including those flagged by international watchdogs for unlawful activity, have been able to secure insurance, according to new research from the University of British Columbia (UBC). 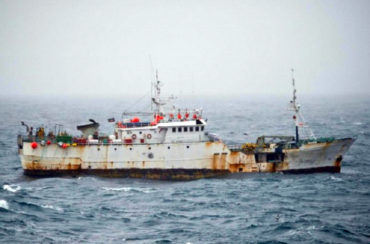 Some of the “most notorious” illegal fishing vessels were found to have insurance coverage, including the Bandit 6, a fleet of six fishing vessels wanted for illegally taking Patagonian tooth fish from southern waters. Photo: www.seaaroundus.org.

The study, titled Cutting a lifeline to maritime crime: marine insurance and IUU fishing and published Monday in the journal Frontiers in Ecology and the Environment, found that restricting or eliminating access to insurance for illegal, unreported and unregulated (IUU) fishing vessels could alter the associated balance of costs and benefits in favour of reducing IUU fishing activity.

“Restricting access to insurance could play a major role in ending illegal fishing, and right now, it’s a largely overlooked method,” said lead author Dana Miller, who studied illegal fishing and insurance while she was a postdoctoral fellow at UBC.

“IUU fishing is not an issue that is currently being addressed by insurers, and an opportunity exists for developing strategies to confront this global problem within the marine insurance sector,” the study’s abstract said. “We believe that restricted access can be achieved through modified policies and procedures, and recommend that – at a minimum – insurers consult officially verified IUU vessel lists to make certain that listed vessels are not granted insurance coverage.”

These lists include regional fisheries management organizations’ IUU vessel lists, and the list of vessels that INTERPOL has issued Purple Notices for, seeking information on their activities, associations, and whereabouts. “This approach is a much less expensive way to prevent illegal fishing than traditional methods,” said co-author Rashid Sumaila, the project director of OceanCanada and a professor in the UBC Institute for the Oceans and Fisheries, on Monday in a press release from the university.

Illegal fishing is a major problem that siphons an estimated $10 to 20 billion annually from the global economy, and causes millions of tonnes of fish to disappear from the oceans, the release said. Insurance can be financially beneficial for fishing vessels because it eliminates the risk of large financial loss should an accident occur.

Efforts to combat illegal fishing often focus on monitoring and surveillance, through the use of satellite tracking and inspections. However, the insurance industry has largely been left out of the discussion, even though they may have the ability to make a “significant impact” on the number of illegal vessels by refusing insurance, UBC said.

Some of the “most notorious” illegal fishing vessels were found to have insurance coverage, including the Bandit 6, a fleet of six fishing vessels wanted for illegally taking Patagonian tooth fish from southern waters. The Bandit 6 vessels were recently caught in different regions of the world after being on internationally recognized lists like the European Union’s IUU vessel list for years. “It was shocking when we found that out,” said Miller. “Insurers should take the simple step of consulting IUU fishing vessel lists to make sure that these notorious and well-known ships are refused insurance.”

The authors also recommend that insurers mandate that all vessels over a certain size be assigned an International Maritime Organization ship identification number and operate satellite automatic identification vessel tracking technology. These measures would tighten regulation and increase transparency, the release concluded.