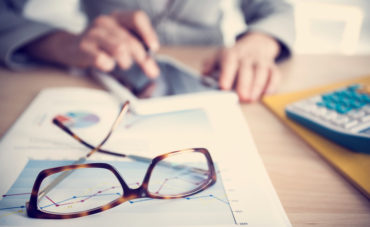 RSA further noted a record Group current year underwriting profit of 271 million pounds last year compared to 129 million pounds in 2015. The Core Group attritional loss ratio was 1.4 points better than last year, while weather and large losses 0.3 points worse, RSA said in a statement. Group prior year underwriting profit was 109 million compared to 91 million in 2015. Core Group premiums were up 6% for the year to 6.3 billion pounds. 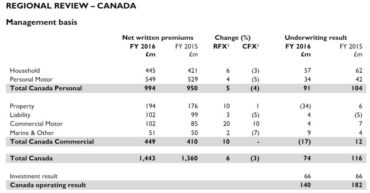 “We have had a strong and resilient year in Canada, absorbing our share of losses from Fort McMurray, the largest natural catastrophe in Canadian history, yet still delivering an underwriting profit of 74 million pounds and [combined operating ratio] of 94.9%,” the statement said.

However, conditions in Canada still remain competitive, particularly in the commercial broker channel, RSA noted, saying that its priority “continues to be on sustained underwriting discipline.”

The statement noted that the Canadian underwriting profit for the year of 74 million pounds (compared to 116 million pounds in 2015) “was in line with our expectations, even after absorbing the impact of the Fort McMurray wildfire losses in May where our reinsurance programme limited our exposure to a net claims cost of 42 million pounds. The weather ratio was therefore elevated at 5.7% (1.4 points worse that long term averages). Large losses were higher than expected at 6.4%, driven by a small number of large claims in Commercial Property.”