PRINCE ALBERT, Sask. – A city that was forced to close its water intakes after an oil spill on the North Saskatchewan River has received a $5-million payment from Husky Energy. 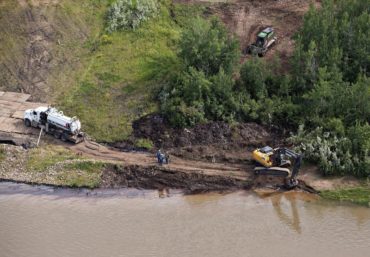 The city of Prince Albert said the initial payment will help cover direct costs and indirect losses due to a pipeline leak that spilled up to 250,000 litres of oil mixed with a lighter hydrocarbon into the river near Maidstone, Sask., in July.

The city was left scrambling to find other water sources and footed the bill for two temporary water lines to serve residents.

Prince Albert said it has invoiced around $2.5 million to Husky (TSX:HSE) to date and is expecting more than $2 million a month in costs to maintain the temporary water lines.

It’s not known when Prince Albert, along with the cities of North Battleford and Melfort, will be able to start taking water from the river again.

Prince Albert Mayor Greg Dionne said the $5 million is “a payment of good faith” that Husky will cover costs from the spill.

“Husky Energy had promised from the onset that they would take full responsibility for the oil spill and pay all associated costs, and this payment is a good indicator that they are delivering on that promise,” Dionne said Monday.

Meanwhile, the Saskatchewan Water Security Agency said 21 samples taken from the river Aug. 4 and 5 are promising because they meet national and provincial drinking water standards.

However, a couple of samples had levels higher than guidelines set for freshwater aquatic life.

Water agency spokesman Sam Ferris said that, based on the data, he’s “fairly optimistic” about water intakes turning back on.

“I think it will be in the weeks category and not the months,” Ferris said.

“But saying that, we do need to receive the risk assessment that’s being developed through the technical working group … as well as more sample results.”

Ferris said the agency wants to know the location of any oil that has not been cleaned up _ and its potential long-term risk – before giving the go-ahead to reopen intakes.

He also said the findings are “generally in agreement” with those from Husky.

A report released by Husky on Aug. 3 said water tests done in the days immediately after the spill found oil levels too high for Canadian drinking water guidelines in five samples within 20 kilometres of the spill site.

It also said no additional high levels were detected in any samples at any location since July 24, including the water intakes at North Battleford and Prince Albert.

Those finding were based on more than 900 water samples at over 60 locations along the river.

– By Jennifer Graham in Regina