Police in Saskatchewan will focus on distracted driving as their traffic safety spotlight for the month of October.

Throughout the month, police across the province will be using a variety of tactics to catch distracted drivers in the act, including surveillance from unmarked vehicles and plainclothes officers on the sidewalks, Saskatchewan Government Insurance (SGI) said in a press release earlier this week. In addition, Regina Police Service is running “Operation Bus Cop,” with officers watching for distracted drivers from city buses.

SGI said in the release that policy will be on the lookout for people using handheld cellphones to talk, text, email or browse online while driving.

It is illegal for drivers in Saskatchewan to use, view, hold or manipulate a cellphone while driving, meaning that “even if you’re simply holding a cellphone and not using it, you can still be charged,” SGI reported. Drivers caught using their cellphone while driving for the second time within one year will have the vehicle they are driving seized for seven days. Experienced drivers can only use a cellphone if it is mounted to their visor or dash, and they use the voice-activated or one-touch functions. Learner and novice drivers are not allowed to use a cellphone of any kind, not even hands-free, the Crown corporation added. 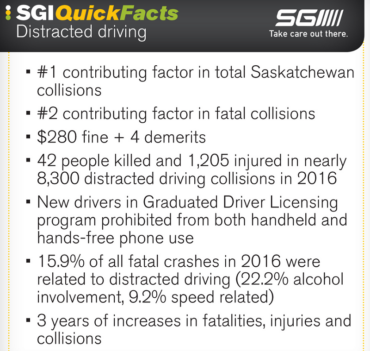 The penalty for distracted driving is a $280 fine and four demerit points under SGI’s Safe Driver Recognition program.

“Drivers are still not getting the message,” said Superintendent Brian Shalovelo of the Saskatoon Police Service. “If you are in control of a vehicle, anything that takes your attention away from the road is dangerous. If someone says they were picking up a CD on the floor when they lost control, that is distracted driving. Changing the radio station, smoking a cigarette, reading a map or your mail – these are all examples of how a driver can be distracted. We’ve even seen people watching Netflix while driving,” he said.