Police in Saskatchewan will be looking for people driving with suspended licences and those driving vehicles that don’t have current plates as part of November’s traffic safety spotlight, Saskatchewan Government Insurance (SGI) announced on Friday. 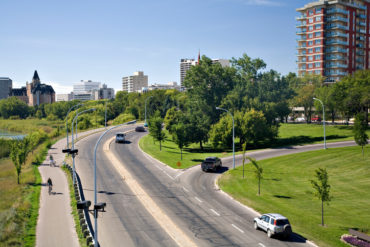 Provincial police will be helped by automated licence plate readers (ALPRs), which make it easier for them to “quickly and efficiently identify risky drivers/vehicles,” SGI said in a press release, adding that ALPRs can scan one plate per second. Dozens of police cars throughout Saskatchewan have been equipped with this technology over the past few years, with help from funding from SGI.

To legally drive a motor vehicle on public roads in Saskatchewan, drivers need a valid licence, registration and insurance. However, at any given time, more than 50,000 drivers are suspended in the province for “periods of time ranging from a few days to indefinitely,” SGI reported. As well, some people choose not to abide by their suspensions. In 2016, there were more than1,800 convictions for driving while disqualified.

“People don’t get suspended without cause,” noted Earl Cameron, executive vice president of SGI’s Auto Fund. “They may have their driving privileges revoked due to impaired driving or other dangerous driving behaviours, which can put other road users at risk. To anyone who makes the bad decision to drive without a valid license or insurance, our message is simple: Do not risk it.”

The consequences for driving while disqualified are serious, with potential Criminal Code of Canada charges, fines, jail time and a minimum 30-day vehicle seizure (along with the resulting fees). If a driver causes a collision and they don’t have a valid licence or insurance, they can be held responsible for all the resulting costs.

The consequence for operating an unregistered vehicle is a $580 fine and one demerit point in the province’s Driver Improvement Program. Repeat offences result in a seven-day vehicle seizure.

Drivers are assigned demerit points every time they are convicted of a traffic offence or are responsible for a vehicle collision. The points are assigned based on the cost of the damages and how much the driver has been determined to be at fault for the collision.