Saskatchewan Government Insurance (SGI) announced on Tuesday that distracted driving is returning as the traffic safety spotlight for the month of March. 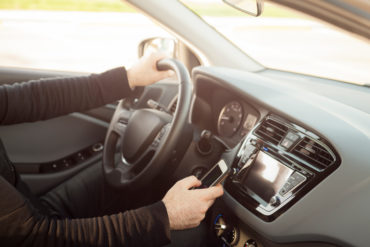 Police across the province will be watching for drivers using their cellphones while behind the wheel, including those making calls, sending texts or sharing information on social media, SGI said in a press release. Police will also be on the lookout for motorists driving without due care and attention, due to distractions such as eating, putting on makeup, or programming a GPS, which can take a driver’s focus off the road.

“When you’re behind the wheel, you’re responsible for thousands of pounds of glass and steel,” warned Earl Cameron, executive vice president of SGI’s Auto Fund. “At road speeds, a quick lapse in attention can come with a lifetime of consequences. The next time you have the urge to do anything but drive while behind the wheel, ask yourself if that distraction is really worth it.”

Cellphones are one of the key causes of distraction while driving as they have the potential to take a driver’s eyes, ears and attention away from the road. “While texting or talking on the phone are problematic for drivers of all ages, distractions such as social media and mobile games have made phone use while driving even more enticing,” the release said.

Cellphone legislation was strengthened in Saskatchewan on Jan. 1. It now prohibits drivers from using, viewing, holding or manipulating mobile devices while driving. “Experienced drivers can use hands-free cellphones if they are activated with voice commands or one-touch, and are dashboard, visor or cradle mounted,” the statement explained, adding that new drivers – or anyone in a Graduated Driver Licensing program, can’t use the cellphones at all (not even hands-free).

In January, SGI and Saskatchewan law enforcement focused on impaired driving for the fourth consecutive month. Seven people were charged with having a blood alcohol content (BAC) between .04-.08, while 269 people were charged with exceeding .08 BAC, impaired driving or refusing to provide a breath sample. Police also issued tickets for other traffic infractions including: 3,376 tickets for speeding/aggressive driving; 397 tickets for distracted driving (321 of those were for cellphone use); and 322 tickets regarding seatbelts/child car seats.