Saskatchewan Premier Brad Wall has released the province’s Climate Change White Paper, calling for adaptation and innovation instead of taxation on carbon. 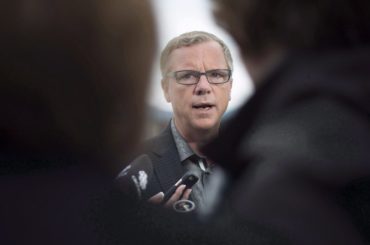 Saskatchewan Premier Brad Wall arrives for a meeting of Premiers in Whitehorse, Yukon, Friday, July, 22, 2016. It seemed to come as a surprise to everyone: Prime Minister Justin Trudeau telling the House of Commons that Ottawa will set a minimum price for carbon pollution, forcing the hand of any province or territory that’s not doing it themselves. THE CANADIAN PRESS/Jonathan Hayward

“There are three approaches we can take to fighting climate change – adaptation, innovation and taxation,” Wall said in outlining his alternative approach to Prime Minister Justin Trudeau’s recently announced “pan-Canadian floor price on carbon pollution.” Of the three approaches, Wall said in a statement on Tuesday, “a carbon tax will do the most harm to the economy while having the least positive impact on reducing emissions. We should be focusing our efforts on innovation and adaptation, not taxation.”

Wall noted that there are more than 2,400 new coal-fired power plants planned or under construction around the world, according to a report released last December at the Paris climate change summit. Those plants alone will emit 6.5 billion tonnes of carbon dioxide a year – nearly nine times Canada’s annual greenhouse gas (GHG) emissions.

“This is why innovation – developing technology that can be used around the world to reduce emissions – is the logical response if we actually want to solve the problem,” Wall said in the statement.  “In Saskatchewan, we’re focused on making a difference in that battle through the development of carbon capture and storage (CCS) that could dramatically reduce the emissions from those 2,400 new coal-fired plants.”

Wall’s plan for action by the Saskatchewan and Canadian government includes: 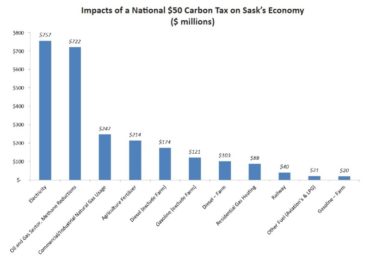 “Make no mistake – a carbon tax will harm Saskatchewan,” Wall said in the statement. “Thousands of people make their living in trade-exposed, carbon-intensive industries that are especially vulnerable. Energy, mining, agriculture – the backbone of Saskatchewan’s economy – will be hit hard by a carbon tax.”

On Oct. 3, Trudeau pre-empted climate change negotiations with Canada’s premiers, announcing that the federal government will impose a pan-Canadian floor price on carbon pollution, the Canadian Press reported. Under the plan, a “low carbon price” of $10 per tonne would start in 2018, rising by $10 per tonne each year until it reaches $50 per tonne in 2022.

And he gave the provinces just two options for implementing that price: either impose their direct price on carbon that meets or exceeds the national flood price, as British Columbia has already done, or set up a cap and trade system, as Ontario and Quebec are developing.