The city of about 40,000, about 140 kilometres northeast of Saskatoon, is no stranger to wildfires, but Dionne said this blaze was worryingly close.

“We are fighting it on the ground and in the air,” he said.

The Saskatchewan Public Safety Agency said the fire began about four kilometres northeast of Prince Albert on Monday afternoon. The cause was still being investigated.

It quickly grew with unseasonably high temperatures and strong winds.

A state of emergency was declared for Prince Albert and the Rural Municipality of Buckland later in the day. 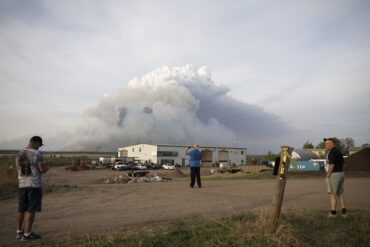 Residents of Prince Albert watch a plume of smoke rise from a forest fire burning northeast of the city in Prince Albert, Sask., Monday, May 17, 2021. The northern Saskatchewan city has declared a local state of emergency due to a wildfire that’s fast-moving and forcing some residents to flee for safety. THE CANADIAN PRESS/Kayle Neis

The fire had grown to about 37 square kilometres early Tuesday, although it appeared to be moving away from the northern edge of the city.

The safety agency said 29 people who were forced to evacuate the surrounding area had checked into local hotels. About 40 others in nearby homes were on standby to leave if the fire shifted.

Dionne said no homes or other structures had so far been destroyed.

Steve Roberts, with the safety agency, said the blaze remained uncontained. “Our weather will not be favourable,” he said.

The daytime high for the city was nearing 30 C on Tuesday.

An expected temperature drop later this week would make a significant difference, Roberts said, although he added that getting the fire under control was days away.

Joel Cherry with SaskPower said 10 transition structures were damaged and many were burned to the ground.

About 9,000 customers were without power, including those in Waskesiu, Meath Park, La Ronge and Stanley Mission.

Cherry said there were extra challenges to restoring power. One transmission line serves the entire area and crews had to get to the area by helicopter.

“Logistically it takes time to respond to something like this.”

– By Kelly Geraldine Malone in Winnipeg

Feature image: Fire crews drop fire retardant from the air near a forest fire burning northeast of the city in Prince Albert, Sask., Monday, May 17, 2021. The northern Saskatchewan city has declared a local state of emergency due to a wildfire that’s fast-moving and forcing some residents to flee for safety. THE CANADIAN PRESS/Kayle Neis