MONTREAL – There were no serious injuries after two school buses collided and caught fire Tuesday on a highway north of Montreal.

About 25 of the roughly 50 children aboard the two buses were taken to hospital by paramedics as a preventive measure.

Quebec provincial police say three vehicles – the two buses and a car – were involved in a collision on Highway 640 near St-Eustache. 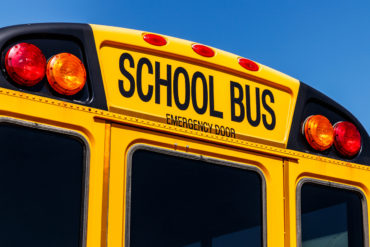 One school bus driver wasn’t able to stop in time and struck the car ahead of him at about 10 a.m., then the other bus ran into the back of the first bus.

The children, between the ages of 5 and 12, were from a city-run day camp in Brossard, Que.

The city confirmed it was contacting parents, and in the meantime children were taken to a nearby auto dealership, where they were given something to eat and drink.

“We saw the bus with smoke and went to get them off the side of Highway 640,” dealership employee Stephane Sigouin said. “Emergency services arrived after to take over.”

Denis says two adults on the school buses were also slightly injured, but not the drivers.

Provincial police are investigating the incident.