Global reinsurer SCOR announced on Wednesday that its Global P&C segment recorded “strong technical profitability with a robust net combined ratio of 93.8% despite a high number of events in all perils and regions in the second quarter of 2016 and with reserve releases of 40 million [euros] accounting for 1.6 [points] of the H1 2016 combined ratio.” 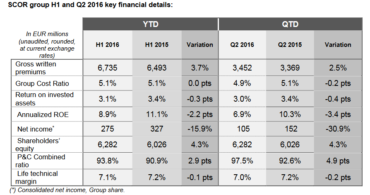 The Group net income reached 275 million euros in H1 2016, down 15.9% compared to H1 2015 (327 million euros) “due to a high number of natural catastrophes and a challenging macroeconomic environment,” SCOR said in a press release. “The technical profitability and net income generation recorded by the Group demonstrate SCOR’s capacity to absorb various shocks, such as a high number of natural catastrophe events, the U.K. referendum results leading to the announcement of Brexit, low and prolonged interest rates and a long-lasting P&C soft cycle.”

A high level of nat cat events across various perils and regions had a12-point impact on the Q2 combined ratio, SCOR reported, leading to a net nat cat ratio of 6.9 points in the first half of 2016. Preliminary net pre-tax estimates for these events include, in particular, the Fort McMurray wildfire for 65 million euros, earthquakes in Japan, Ecuador and Taiwan, storms in Germany and floods in Sri Lanka, as well as a late June hailstorm in the Netherlands.

“In the first half of 2016, SCOR has proved its capacity to absorb shocks thanks to its high level of diversification,” said Denis Kessler, chairman & CEO of SCOR, in the release. “Despite numerous natural catastrophe events and the political uncertainty following the U.K. referendum, SCOR continues to post strong results. SCOR keeps on expanding its footprint in the first half of 2016, with both the Life and P&C divisions delivering strong technical profitability.”

Other results for the first half and second quarter of 2016 include: