DETROIT – The Volkswagen executive who once was in charge of complying with U.S. emissions regulations was arrested during the weekend in Florida and accused of deceiving federal regulators about the use of special software that cheated on emissions tests. 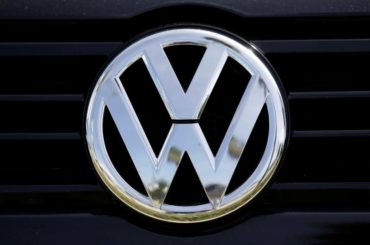 FILE – In this Sept. 21, 2015, file photo, a Volkswagen logo is seen on car offered for sale at New Century Volkswagen dealership in Glendale, Calif. The Volkswagen executive, Oliver Schmidt, who once was in charge of complying with U.S. emissions regulations has been arrested in connection with the company’s emissions-cheating scandal, a person briefed on the matter said Monday, Jan. 9, 2017. (AP Photo/Damian Dovarganes, File)

Oliver Schmidt, who was general manager of the engineering and environmental office for VW of America, was charged in a criminal complaint with conspiracy to defraud the U.S. government and wire fraud.

Schmidt, 48, a resident of Germany, is the second VW employee to be arrested in an ongoing federal investigation into VW, which has admitted that it programmed diesel-powered vehicles to turn pollution controls on during tests and to turn them off in real-world driving. The scandal has cost VW sales and has tarnished its brand worldwide.

He was ordered held Monday at a hearing in Miami, where prosecutors argued that he posed a flight risk if released. He faces another hearing Thursday. After that he likely will be taken to Detroit, where the Justice Department investigation is based.

The complaint, dated Dec. 30, accuses Schmidt of conspiring with other Volkswagen executives to mislead U.S. regulators about why their vehicles emitted higher emissions on the road than during tests. Schmidt “offered reasons for the discrepancy” other than the fact that the company was cheating on emissions tests through illegally installed software on its diesel vehicles, court documents say.

Tests commissioned by the non-profit International Council on Clean Transportation in 2014 found that certain Volkswagen models with diesel engines emitted more than the allowable limit of pollutants. More than a year later, Volkswagen admitted to installing the software on about 500,000 2-litre diesel engines in VW and Audi models in the U.S. The company later said some 3-litre diesels also cheated.

After that study, Schmidt, in an apparent reference to VW’s compliance with emissions, wrote a colleague to say, “It should first be decided whether we are honest. If we are not honest, everything stays as it is.”

He later emailed another executive with an analysis that listed possible monetary penalties from the Environmental Protection Agency.

Schmidt’s bio for a 2012 auto industry conference said he was responsible for ensuring that vehicles built for sale within the U.S. and Canada comply with “past, present and future air quality and fuel economy government standards in both countries.” It says he served as the company’s direct factory and government agency contact for emissions regulations. The criminal complaint says Schmidt was promoted in 2015 as a principal deputy of a senior manager.

Schmidt’s attorney, David Massey, said in court Monday that his client has assets in the U.S., or the assets of friends, totalling about $1 million that would secure his bond. He said Schmidt had been co-operating with the FBI on the emissions probe and had no intent to flee. Massey also said Schmidt was arrested while on vacation in South Florida and had no idea he was going to be charged with a crime while in the U.S.

But Justice Department prosecutor Ben Singer said Schmidt had been evasive with regulators and warned a judge that he was a flight risk.

Volkswagen said in a statement Monday that it is co-operating with the Justice Department in the probe. “It would not be appropriate to comment on any ongoing investigations or to discuss personnel matters,” the statement said.

Herbert Diess, a member of Volkswagen AG’s board of management, appeared in Detroit Sunday evening to introduce a new version of VW’s Tiguan SUV ahead of the North American International Auto Show. He wouldn’t comment when asked if some Volkswagen executives refused to come to the auto show for fear of being arrested.

He said he hoped the Justice Department investigation would be resolved “as soon as possible.”

The company has agreed to either repair the cars or buy them back as part of a $15 billion settlement approved by a federal judge in October. Volkswagen agreed to pay owners of 2-litre diesels up to $10,000 depending on the age of their cars.

In October, VW engineer James Robert Liang, of Newbury Park, California, pleaded guilty to one count of conspiracy to defraud the government and agreed to co-operate with investigations in the U.S. and Germany. Liang was the first person to enter a plea in the wide-ranging case, and authorities were expected to use him to go after higher-ranking VW officials.

A grand jury indictment against Liang detailed a 10-year conspiracy by Volkswagen employees in the U.S. and Germany to repeatedly dupe U.S. regulators by using sophisticated emissions software. The indictment detailed emails between Liang and co-workers that initially admitted to cheating in an almost cavalier manner but then turned desperate after the deception was uncovered.

The complaint against Schmidt also references two co-operating witnesses in the company’s engine development department, who have agreed to speak with investigators in exchange for not being prosecuted.

The EPA found that the 2-litre cars emitted up to 40 times the legal limit for nitrogen oxide, which can cause human respiratory problems.

Tucker reported from Washington. Dee-Ann Durbin in Detroit and Curt Anderson in Miami contributed to this report.