A severe storm that swept through Alberta, Saskatchewan and Manitoba during the second week of July has resulted in more than $48 million in insured damage, according to Toronto-based Catastrophe Indices and Quantification Inc. (CatIQ), which delivers detailed analytical and meteorological information on Canadian natural and man-made catastrophes. 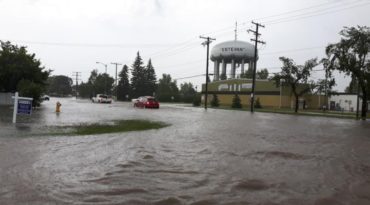 From July 8 to 11, a low pressure system caused severe thunderstorms in the Prairies, the Insurance Bureau of Canada (IBC) said in a press release on Tuesday. The storms produced strong winds, hail, lightning, heavy rainfall and funnel clouds. This system also caused significant flooding in Estevan, Sask. and produced a brief tornado touchdown in Humboldt, Sask. on July 10.

Most property damage was reported to have occurred in Saskatchewan, IBC said in the release. The most severe isolated thunderstorm cell over Estevan produced up to 130 millimetres of rain in a short period of time. This overwhelmed the local storm water systems and caused streets to flood and sewers to back up.

Earlier in August, CatIQ reported that another severe summer storm that swept through southern Ontario also during the second week of July resulted in more than $30 million in insured damages. On the evening of July 8, a passing cold front caused severe thunderstorms in areas north of Toronto, including Orillia, Markdale and Bradford. The storm produced winds of up to 100 kilometres an hour, as well as intense lightning, heavy rain and hail.