Crews from the City of Saskatoon are responding to “power outages, lifted manhole covers and flooded streets” following a severe thunderstorm Monday evening. 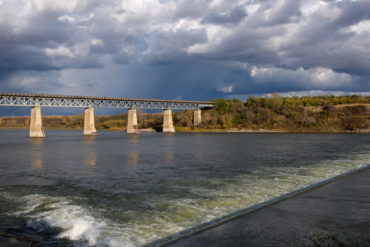 According to a press release on Monday from the city, Environment Canada issued a thunderstorm warning and then a thunderstorm watch earlier on Monday. The weather service said a low pressure system in south central Saskatchewan “has and will continue” to bring a risk of severe thunderstorms to the area on Monday and overnight.

“At first assessment, the hardest hit areas appear to be in the south and west ends of the city,” the release said, noting that Confederation Drive and Laurier Drive was impassable following the downpour. The Saskatoon Police Service also reported stranded vehicles on Fairlight Drive because of high water, the city said.

As of 10 p.m. on Monday, there were a number of smaller outages affecting single homes where secondary lines had been knocked down by trees.

The Canadian Press reported that the storm “dumped hail about the size of quarters, which appeared to block storm sewers and may have contributed to the flooding.”

Related weather systems dumped a large volume of hail in the Cypress Hills region and pushed wind gusts to more than 100 kilometres an hour in Estevan, but dropped only minimal rain on Regina.

Storm by saskatoon this time with a church. #skstorm 659pm pic.twitter.com/cFriEr6v6b