SGI Canada will be assigning additional adjusters to Estevan, Saskatchewan – among the areas in the province hit by heavy rainfall that prompted localized flash flooding – to handle what is anticipated to be higher-than-normal claim volumes, the insurer reported Monday afternoon.

“SGI will be assigning additional adjusters to Estevan, or other areas as required, to help process claims as quickly as possible,” notes a statement from SGI Canada, adding that more rain is in the forecast. 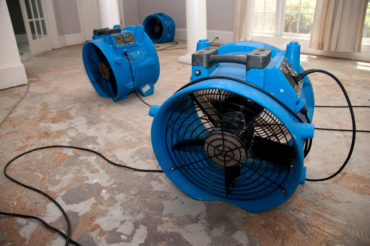 This is the sewage water damage recovery process in a residential home. The flooring is ripped off, and the rooms are sprayed with biowash. Industrial fans and dehumidifiers is placed in the room for the drying and restoration process. The process will last 3 days.

In an update posted Tuesday, the Weather Network notes that by Monday in Estevan, “water levels had fallen significantly, down from the 125 mm of rain that poured down on the city the day before.” Still, rainfall warnings remained in place as an additional 10 mm to 25 mm could fall Tuesday.

“Two-day rainfall totals could be as high as 75 mm to 100 mm by Wednesday morning in some areas of the southern Saskatchewan,” the update notes, citing information from an Environment Canada rainfall warning. “The stalled low pressure system will begin to slowly push east into south-central Manitoba Tuesday giving additional rainfall amounts to some places there as well.”

An Environment Canada alert for Flin Flon, among other Manitoba communities, notes rain, at times heavy, is expected.

With 75 mm already falling in the Flin Flon area, “more rain is expected today and, as a result, some areas will receive 50 mm to 80 mm over the next 24 hours as more showers and thunderstorms move slowly through the area,” Environment Canada reports in the Flin Flon update.

Derek Wilson lives in Willow Bay. This was the scene outside his home last night. #Estevan #skstorm pic.twitter.com/5JyOIUKxVU

City of Estevan administration declared a state of emergency July 11 for the community of about 11,000. The city’s 4th Ave. South, Woodlawn Ave. South and the 600 Block of 61h St. remained closed, an administration statement notes.

“Absolutely no travel is permitted and the public must stay away from this area. The storm did cause power to go out at the Water Treatment Plant (WTP) and both of the reservoirs. Back-up power capabilities were utilized at the WTP, as well as the Wellock Road Reservoir and the Smith Street Reservoir,” it states.

Pointing out that the city has two days of treated water in storage at all times, the administration reports “drinking water quality and quantity has not been affected as a result of the storm.”

The safest, and driest, transportation right now, with water up over people's waists #Estevan @ctvregina pic.twitter.com/h5wJb0CCWm

The City of Estevan is currently working with Saskatchewan’s Disaster Assistance Relief Plan.

If safe to do so, SGI recommends that homeowners dealing with property damage can take a number of steps, including the following:

“First and foremost, take care of yourself and your family and make sure everyone is safe. When you’re able to do so, call SGI to report your claim,” says Don Thompson, SGI Canada executive vice president and chief operating officer.

Wade Bye finished his basement just a couple of months ago. It is more than ankle deep right now. #estevan #skstorm pic.twitter.com/56TXVZzHqf

RT @smillssk: This is the current state of Wade Bye's house. His house is one of the worst streets in #Estevan pic.twitter.com/iJWiahR8yM

#Estevan summer storm. Pics.driving to get home, then my neighbourhood, then a friend's basement and backyard. pic.twitter.com/etfbTq23J8

Even our summer student is helping hand out flood relief kits in #Estevan pic.twitter.com/59U8EqzJl4

Derek Wilson lives in Willow Bay. This was the scene outside his home last night. #Estevan #skstorm pic.twitter.com/5JyOIUKxVU

It's a good thing it's a truck and not a small hutchback #skstorm #estevan pic.twitter.com/ejxqsQ3cCR