Saskatchewan Government Insurance (SGI) announced on Thursday that it has pursued legal action for the first time against two liquor establishments in connection with an impaired driving case that claimed a family of four in January 2016. 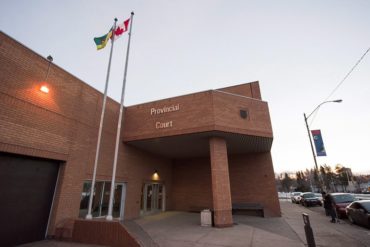 The provincial courthouse in Saskatoon, Sask., is shown where Catherine Loye McKay has been charged with three counts of impaired operation of a motor vehicle causing death in the deaths of a family on the highway in Saskatoon, Sask., Tuesday, Jan. 3, 2016. THE CANADIAN PRESS/Matthew Smith

SGI said in a press release that it filed a statement of claim in the Saskatoon Court of Queen’s Bench against the two liquor establishments that served Catherine McKay alcohol on Jan. 2 and 3, 2016.

“Information relayed in McKay’s criminal proceedings revealed she had been served alcohol at both Industrial Kitchen & Bar and Crackers Licensed Cocktail & Dining Room that night,” SGI said in a press release. “Court heard evidence that McKay’s blood alcohol concentration was nearly three times the legal limit when the vehicle she was driving collided with the car carrying four members of the Van de Vorst family Jan. 3, 2016.”

Parents Jordan and Chanda Van de Vorst died at the scene. Their son Miguire, 2, died in hospital shortly thereafter, while their daughter Kamryn, 5, died the next day.

“This legal action is about accountability for a collision that killed an entire family,” Earl Cameron, executive vice president of SGI, said in the release. “The person who chooses to drive impaired clearly is accountable for their actions. But we need to recognize that if a person is impaired, their judgment is also impaired. Those around them need to take action to ensure no lives are put at risk.”

Cameron added that “when a business is selling alcohol for profit, there is a higher degree of responsibility to prevent the customers they serve from posing a danger to others and themselves. Because no one stopped Catherine McKay from getting behind the wheel, four people died.”

Cameron said that SGI will pursue similar actions against other liquor establishments in comparable cases when the evidence supports it.

“This is a case of contributory negligence,” he argued. “There are laws in place to hold impaired drivers accountable, with jail time, fines and other consequences. We believe that the circumstances of this case are so egregious and the results so tragic, that the establishments who failed to take sufficient actions to prevent it need to be held accountable.”

“In jurisdictions across Canada, we are seeing more rulings where courts are placing increasing accountability on liquor establishments to ensure impaired patrons do not cause harm to others or themselves,” Cameron said in the release. “A recent B.C. case, Widdowson v. Rockwell, saw the courts find a Vancouver pub 25 per cent liable for a crash where an impaired patron could not safely operate his vehicle and hit a pedestrian, causing serious brain injury.”

According to SGI, alcohol is a factor in nearly half of all fatal traffic collisions in Saskatchewan. Over the last decade, more than 600 people have been killed and more than 4,000 injured in collisions involving alcohol in the province.