Shipments of connected wearables will reach 262.5 million in 2021, with Bluetooth remaining the primary connectivity option in the coming years, Internet of Things (IoT) analyst firm Berg Insight said in a statement on Thursday. 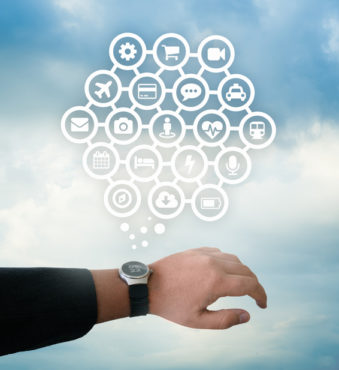 A total of 26.8 million of the wearables sold in 2021 are forecasted to incorporate embedded cellular connectivity, mainly in the smartwatch and people monitoring & safety categories, the statement added.

Smartwatch sales are expected to pick up considerably during 2017 and Berg Insight estimated that shipments will reach about 35 million units, a 66% increase year-on-year. “Technology advancements, increased consumer awareness and wide availability of devices in different price segments will help the smartwatch category to reach mass market appeal and surpass activity trackers as the largest device category within wearable technology by 2019,” Adam Palmborg, IoT analyst at Berg Insight, said in the statement. 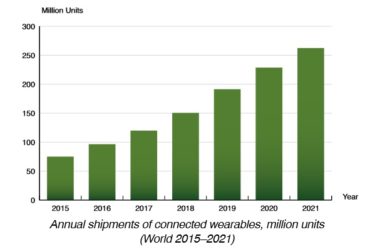 Smart clothing is expected to gain significant traction within the next five years. Low consumer awareness, overlapping use cases and a focus on elite and professional applications have so far limited the adoption among the general public, the firm noted. Still, Berg Insights forecasts that shipments of smart clothing will reach 18.3 million units in 2021, up from 1.56 million units in 2016.

The segment exhibits the second highest CAGR in the wearables industry. Connected wearables such as cardiac rhythm management devices, electrocardiogram (ECG) monitors, mobile personal emergency response systems (mPERS) and wearable computers are already common in the medical, people monitoring and enterprise segments. “Furthermore, miniaturized electronics, low power wireless connectivity and cloud services have enabled the development of a wide range of novel connected wearables such as authentication and gestures wristbands, notification rings, smart motorcycle helmets and smart gloves,” the statement concluded. “Shipments of smart glasses have so far been modest, but promising use cases in professional markets as well as in niche consumer segments will enable smart glasses to become a sizeable connected wearable device category in the next five years.”

Berg Insight has been specializing in major M2M/IoT verticals, such as fleet management, car telematics, smart metering, smart homes, mobile health and industrial M2M since 2004. The firm offers market reports, detailed market forecast databases and advisory services and has provided analytical services to 850 clients in 70 countries. Its customers range from “many of the world’s largest” mobile operators, IT companies and telecom vendors, to venture capitalists, technology start-ups and specialist consultants.