Twenty-four catastrophe bond transactions closed during the 12-month period to June 30, 2016, with a total limit of US$5.2 billion, a decrease on the prior-year period of US$7 billion, according to Aon Securities’ annual report on the insurance-linked securities sector.

The report, Alternative Markets Find Growth Through Innovation, was released on Thursday by Aon Securities, the investment banking division of global reinsurance intermediary and capital advisor Aon Benfield. It analyzes key trends witnessed during the 12-month period, as well as provides an overview of related markets and re/insurance mergers and acquisitions activity. 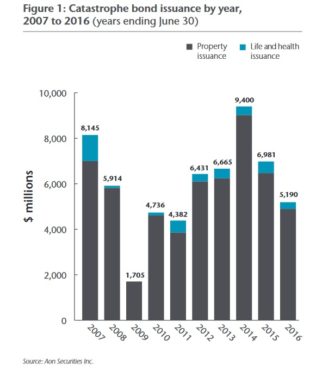 The study attributed the decrease to US$5.2 billion in cat bond issuance for the period to “significantly lower issuance volumes during the first half of 2016, as issuance volumes during the second half of 2015 were relatively flat on a year-over-year basis.” The US$5.2 billion issuance was the lowest for the period since 2011, the report said, adding that the year-over-year reduction of US$1.8 billion was largely due to the lack of issuance in the first half of this year, which was down over US$1.6 billion from the same period in 2015.

“Despite this drop in issuance volume, the total outstanding volume was only reduced by US$825 million – mitigated by the longer coverage periods witnessed in recent years,” the report said. “The overall lower issuance levels were driven by a number of factors, including competition from traditional markets and longer coverage periods, both of which resulted in some cedents renewing capacity less frequently, as well as certain cedents increasing their risk retentions.”

U.S. exposures continued to dominate the cat bond market, with 18 of the 24 transactions comprising U.S. risk in some capacity, Aon Securities said in a press release. On a notional basis, this represented 83% of the period’s issuance, compared to 86% in the prior-year period. Three cat bonds closed covering property risks in Europe, and three insurers sought coverage for Japan risks with catastrophe bonds, securing US$720m total limit. In addition, one extreme mortality bond was brought to market, covering Australia, Canada and United Kingdom risks.

Meanwhile, five quota share sidecars were launched during the 12 months, with a capacity totaling US$1.1 billion for the four sidecars that disclosed their sizes, the release said.

“During the 12-month period under review we saw a continued increase in alternative capital in the reinsurance sector,” said Paul Schultz, chief executive officer of Aon Securities, in the release. “However, continuing a recent trend, the capital is being increasingly deployed in the collateralized reinsurance space rather than in the form of catastrophe bonds, whose overall lower issuance volumes were driven by a number of factors including competition from traditional markets and longer coverage periods, both of which result in some cedents renewing capacity less frequently, and certain cedents increasing their risk retentions.”

From a mergers and acquisitions perspective, while the year-over-year volume of transactions was relatively similar during the period, “the average deal size decreased meaningfully as many of the most likely acquirers were focused on the integration of previous transactions. M&A conditions still remain favorable for deals, as long-term trends towards consolidation in the insurance and reinsurance industries continue.”