When Sohel Imani went looking for a second location for his bike shop in Toronto’s West End, he knew he’d be able to leverage the city’s current commercial rental market.

With dozens of storefronts sitting empty in any given Toronto neighbourhood, Imani says he knew he could throw out lowball offers for rentals spaces because there were any number of other lots for lease that he could go to if an owner flat-out refused.

Last month, the second location of Ya Bikes opened in Toronto’s Roncesvalles neighbourhood, with Imani saying he was pleased to lock in a long term deal at a very favourable rate.

Imani and his co-owner knew that now was the time to jump on a space before prices rebounded.

“We both had that in our head,” said Imani. “That the time might be now from a lessee perspective because there’s so many options on the market.”

Commercial real estate agents and members of BIA’s around Canada say the current climate is a prime opportunity for a business to get a new location at a favourable rate if they’ve managed to stay afloat despite the pandemic.

“Retail has been crushed downtown, all you have to do is walk around,” said Andrew Baker, a broker of record with Lennard Commercial Realty, which operates in Toronto and surrounding cities. 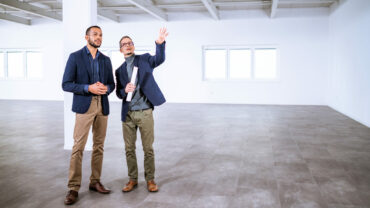 Baker said the current situation is similar to the economic downturn in the early ’90s, where some businesses such as law firms were able to lock in extremely cheap rental contracts that were deeply beneficial to their business in the long term.

He said he’s currently working with the owner of a physiotherapy practice in Mississauga, Ont., that’s looking to double their size while capitalizing on the current vacancy rates.

“She wants to be opportunistic and hard-nosed about it, and she’ll probably get her way,” said Baker.

“It’ll probably set her and her business up for long term profitability for the duration of the lease.”

While experts say there are similar opportunities in cities like Vancouver and Edmonton, not every major urban centre has a rosy renter’s market.

In downtown Calgary, the executive director of the Beltline Business Improvement Area, said many vacant commercial lots are owned by large real estate corporations that are unwilling to drop their rates, despite sky-high vacancy rates around the 35 per cent mark.

Adrian Urlacher said the owners in his downtown district generally prefer to have their spaces used for offices, rather than retail or arts spaces.

He said many property owners have stuck with their rates for years, even as the city suffered from high vacancy rates due to the economic downturn around the energy sector in Alberta.

“I think the problem is we have larger interest groups that come from out-of-market that see no need to drop rents because they’re financed and make their money elsewhere,” explained Urlacher.

With rates at a standstill, Urlacher said local businesses already in the area are suffering, while new businesses haven’t been able to enter the neighbourhood and help revitalize it.

“We have iconic buildings in the Beltline, heritage buildings, that haven’t been rented out for ten years plus,” said Urlacher.

Baker, of Lennard Realty, said small businesses in other cities with more of a renter’s market should look at the current situation as an opportunity.

He said it’s hard to tell if the market has bottomed out, and it’s even harder to predict what the rebound will look like, but now is a good time to set a business up for the future if you have a sound path through the end of the pandemic.

“If I was a small business looking to rent a retail space, I’d be looking to do a long term deal today and lock in lower rates,” said Baker.