Could smart cities be held liable for driverless car crashes?

Fully autonomous vehicles that communicate with other vehicles and city infrastructure will create a brand new exposure for insurers and municipalities.

Traditionally, when there is a pedestrian bodily injury claim from a vehicle accident, there is two parties – the plaintiff (the pedestrian) and the defendant (the driver, who is usually defended by their insurer). 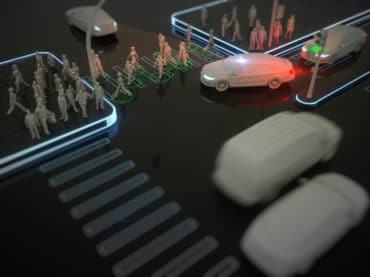 So what happens if the infrastructure “commands” the vehicle to go through the intersection, striking a pedestrian?

“Now you have a brand new exposure,” Sami Shaker, physicist and client relations manager with Kodsi Forensic Engineering, said in an interview Wednesday with Canadian Underwriter. “The city could potentially be on the hook, where traditionally you are just going after the driver. Now you could be going after the car [and insurer], and potentially the city, if you can show through data that somehow the infrastructure communicated with that vehicle and told it to go on through.”

Shaker will discuss driverless vehicles and potential insurance implications next month during a BIP Talk. Shaker, a crash reconstructionist, will speak during a session titled The Driverless Frontier at the Insurance Brokers Association of Ontario (IBAO) Convention in Niagara Falls Oct. 17.

Even though there is the possibility of vehicle-to-infrastructure communication, that doesn’t mean every city will implement it. While large cities like Toronto could probably afford infrastructure to communicate with vehicles, smaller cities wouldn’t be able to completely change their infrastructure. It wouldn’t be practical and is extremely expensive.

Consider a situation in which a lawyer asks for accident records indicating how infrastructure communicated with a vehicle on a particular day and time and could prove how the accident occurred.

“If I were a personal injury lawyer and I could show that, I would put the city on notice and the insurer of the vehicle on notice,” Shaker said.

More News
Related
Two-day hackathon seeks tech solutions to distracted driving, pedestrian safety
Why consumers may be snubbing telematics
Are consumers warming to telematics?
Where Canada should look for regulation on autonomous vehicles