Social media is the medium most able to cause damage to the public image of an individual or organization, according to the results of a new Nanos Research poll. 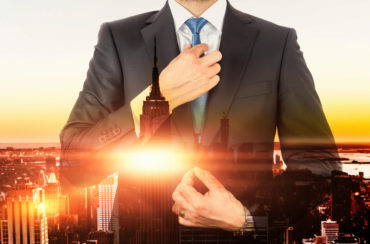 Toronto-based Signal Leadership Communication Inc. (SLC), a social PR consultancy for executives dealing with digital disruption, released the poll results of 1,000 Canadians on Wednesday. The hybrid phone (land- and cell-line) and online survey was conducted as part of an omnibus survey, with a margin of error of ±3.1 percentage points, 19 times out of 20.

According to the survey, 84% of respondents said that social media channels such as Twitter and Facebook “can do a great deal of damage to the image of an individual or organization.” Seventy-one per cent felt this was true of both online news and broadcast television, while just over half (52%) said it about print newspapers and just under half (48%) about radio, SLC said in a press release.

“The danger of social media to inflict image damage is real, so leaders need to take this powerful PR threat to their reputation seriously,” said Bob Pickard, principal of SLC, in the release. “Corporate communicators – not just brand marketers – need to design social media presence accordingly and invest the necessary resources. It all starts with the leaders, with whom an often-demanding public increasingly seeks to have a direct personal connection through online networks.”

The poll also found that nearly three-quarters (71%) of respondents believed that broadcast television could do a great deal of damage, 24% said it could do some damage, 3% said no damage and 2% were unsure. 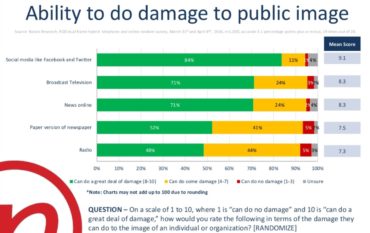 “Social media increasingly shapes the way that news is produced and perceived, so it is crucial for leaders to carefully plan their approach to both traditional and new mediums,” said SLC principal Janice Mandel in the release. “There is very little time today for public relations storytelling. Instead, there is a need to be nimble and respond appropriately as a story plays out. Good judgment and digital savvy are key to managing reputation.”

Mandel added that “there’s far more risk for something to go wrong and explode virally. If it does, the public’s attention is on the leaders online – so they themselves need to understand this new digital dynamic.”