The Canadian collision industry will be “ripped apart beyond belief” in a decade by several disruptors, including connected autonomous vehicles and ridesharing, a speaker suggested Friday at the Canadian Collision Industry Forum (CCIF) meeting in Vaughan, Ont. 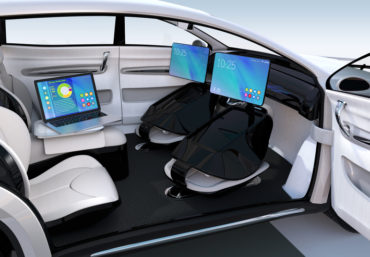 Andrew King, managing partner at Desrosiers Automotive Consultants Inc., discussed “soft” and “hard” disruptors during a session titled Auto Industry Outlook. Soft disruptors are things that will impact the industry, but are manageable, while hard disruptors will “rip the industry apart and lead to a whole new world,” King suggested.

“There’ll be more change in the next decade than there has been in the last 100 years,” he predicted. “The industry 10 years from now is going to be completely different. It’s going to be beyond recognition.”

One of the hard disruptors will be connected autonomous vehicles, King said, using the examples of Google’s self-driving Lexus reaching two million miles recently in California and a fleet of Uber vehicles “driving around completely autonomous” in Pittsburgh. “We’ve seen Tesla come in out of nowhere,” he added.

But despite the advancing autonomous vehicle technology, these developments are leading to “massive issues” in terms of insurance and regulation, King warned. “The technology is there, it can happen. When it does happen, you will see accident rates fall. It is going to shape up the industry, tear it up.”

For vehicle companies, mobility are ridesharing are most concerning. “This is the Ubers of the world,” King said, noting that Uber went from US$150 million of revenue in 2013 to US$1.5 billion in 2015. “We could move away from one family, one car, to vehicle sharing. It’s unknown. It’s certainly growing incredibly fast.”

Another hard disruptor will be the material used in cars. King told attendees that there will be more aluminum, magnesium, composites and “all this stuff mixed together,” making vehicle repair “much more difficult, much more complex and potentially much more expensive. It’s going to shake up the industry beyond belief in terms of the material you’re going to see in cars in the next decades,” he predicted.

In terms of soft disruptors, Millenial interest in purchasing vehicles is something that’s on the radar. King said that while there is some debate in the industry as to whether Millenials – defined by J.D. Power as those born between 1977 and 1994 – will ever buy cars, there is some evidence that they are not doing so. “We think it’s an issue, not a really big issue,” King said, but clarified that “it’s something the industry is definitely worried about.”

By contrast, the Baby Boomers – defined as those born between 1946 and 1964 – have “driven the automotive industry,” with big volumes of that generation now in their late 50s. “They are buying tons of cars, tons of trucks, tons of luxury vehicles. The industry is starting to worry: what happens when the Boomers stop buying stuff?”