Soft market conditions continue to be the biggest concern for the global reinsurance industry, according to Xuber’s Global Reinsurance Survey 2016, released on Friday.

The second annual survey from Xuber, the commercial insurance software business of Xchanging, a CSC Company, revealed that 33% of respondents named soft market conditions as the biggest challenge, with 74% of all respondents listing it among their top five concerns – down from 81% who placed it among their five leading concerns in 2015. 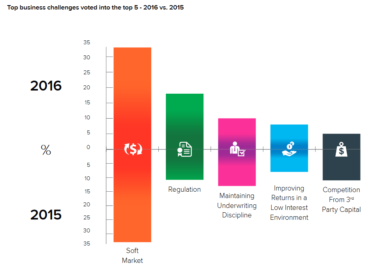 The Xuber questionnaire of senior figures working in the re/insurance industry was conducted by email and telephone surveys in April and May. Thirty-two businesses in Canada, the United States, United Kingdom, Switzerland and Bermuda took part in the survey, not including some respondents who asked to remain anonymous, Xuber, headquartered in London, said in a press release.

Besides soft market conditions, regulation was the second most pressing concern, with 18% naming it their top challenge and 69% recognizing it among their top five concerns. Additional key findings of this year’s survey include:

“The 2016 Xuber Global Reinsurance Survey confirmed that the market’s appetite for change has reached tipping point,” said Chris Baker, executive director of Xuber, in the release. “The industry has spoken and there is an almost universal consensus that a fundamental technology shake-up needs to happen now. The time to innovate has arrived.”

Baker added that the “way insurance is being bought, sold and managed has changed, and the survey results suggest the industry must take an innovative ‘digital first’ approach in order to maintain relevance with clients. Reinsurers which create solutions grounded in technology that deliver across the insurance value chain will best serve their customers and will thrive in the digital revolution.”