Burst water pipes are a frequent cause of large claims in Quebec, Allstate Insurance Company of Canada suggested Monday. 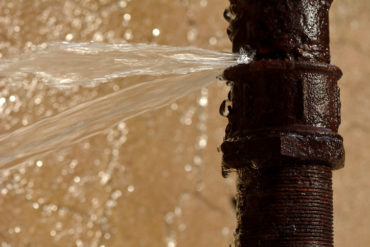 In a press release, Allstate shared some findings from the Allstate Insurance Safe Homeowners Study.

In the study of household incident claims data, “there have been notable increases in certain types of claims in Quebec homes over the years,” Allstate noted. “Damages due to water, especially burst pipes, are the most frequent and costly home insurance claims in Quebec.”

“Water claims due to burst pipes” are the most frequent (53%) of claims, Allstate said. This was followed by toilet and shower leaks, at 35%.

“Some leaks are often readily apparent, such as a burst pipe which can quickly cause major water damage, but other leaks like toilet drips or leaks from the supply tubes can go undetected for years if the source is not clearly visible,” Allstate said. “Older hot water tanks can also result in leaks and other problems, such as poor water quality, inefficiency, and breakdowns.”

The Allstate Insurance Safe Homeowners Study is released annually and compares data over a 10-year period of claims experience. Allstate conducted an analysis of its property claims data to determine the most frequent cause of damages in Quebec households.  It analyzes claims information from seven types of general perils. Each peril is then divided in up to 20 possible causes of loss.

“Claims data is limited to damages for which there was a payout,” Allstate said. “The data ranks frequency of damage, not severity of loss.”

Allstate advises homeowners to check toilet valves for whether they “constantly emits a hissing or gurgling sound when the toilet is not in use.” It also advises homeowners to consider replacing hot water tanks after 10 to 12 years, and to have specialists check for signs of rust, cracks, corrosion, leaks and sediment build-up.

Allstate is also advising homeowners to clean oven interiors and to look under range hoods to check for grease build-up. The insurer also advises consumers not to run power cords under rugs and against placing portable space heaters close to combustible materials such as curtains, beds, clothing, upholstery and rugs.

More News
Related
37% of Quebec tenants have no home insurance: IBC survey
Exclusion clause for ‘conversion’ in comprehensive auto policy ‘does not come close’ to being easily intelligible: Court
Winter storm could become first billion-dollar weather event of 2016 for U.S.
Extreme cloud attack could pack as much of a cost wallop as Hurricane Sandy