HIGH RIVER, Alta. – A new housing and retail development in High River, Alta., is being hailed as proof of renewed confidence in the town’s ability to handle another flood event. 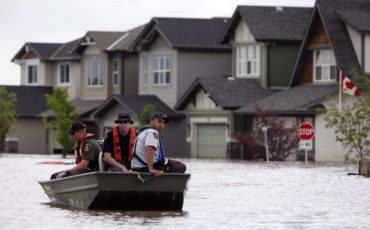 Members of the RCMP return from a boat patrol of a still flooded neighborhood in High River, Alta., on July 4, 2013. Jodi Dawson thinks it’s high time people stopped talking about High River’s soggy history. The town of 12,000 just south of Calgary gained an international profile three years ago when flooding in parts of southern Alberta resulted in billions of dollars in damage. Dawson, High River’s economic development manager, says a lot has changed in three years and it’s time to put the past behind. THE CANADIAN PRESS/Jeff McIntosh

Massive floods that raged through southern Alberta in the summer of 2013 forced 100,000 people from their homes, primarily in Calgary and High River, and caused an estimated $6 billion in damage.

Since then, High River has been rebuilding and working to protect itself against future floods.

On Wednesday, one of Canada’s largest developers, Dream Development, announced plans to build new homes and a new strip mall in the town south of Calgary.

The total project is 4.11 acres and the hope is to have people take possession of the new homes by the fall of 2017.

Mayor Craig Snodgrass said it’s proof that the difficult and expensive job of flood mitigation is paying off.

“It’s massive to High River to have the Montrose Dream Development continuing on and starting their next phases and it’s just a testament to the work we’ve done in this town for the last four years,” he said.

“Protection was number one after what happened and we’ve done that to the point where we’re the most well-protected community in Canada from flood risk now. That has built the confidence not just with the residents that are here now, but for the future residents that are looking at High River as a place to enjoy life.”

Snodgrass said the flood changed the town for the better.

A number of initiatives have been undertaken to improve flood protection including the construction of over eight kilometres of berms.

“We were working alongside all the residents in the recovery and just trying to move forward,” said Trevor Dickie of Dream Development. “It was a very impactful event and I think we’re looking to move on.”