Why speed bumps can be a double-edged sword

Madison Properties Inc. owns a shopping plaza in Toronto. Maria Pia Cannito tripped and fell on the plaza property during the summer of 2012 after visiting her bank, Judge Paul O’Marra of the Ontario Superior Court of Justice wrote in his recent ruling dismissing Cannito’s lawsuit against the property owner.

Cannito alleged in her lawsuit that she tripped over a speed bump in a laneway between the parking lot and the plaza building, near the interchange of highways 400 and 401. The speed bump was painted with yellow lines in a grid pattern but not solid yellow, O’Marra wrote in Cannito v. Madison Properties Inc., released Oct. 25. 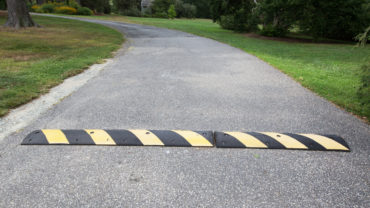 Testifying for Cannito as an expert witness was Robert Shirer, a forensic engineer. Shirer told the court that speed bumps should be painted solid yellow and meet guidelines stipulated by the American Society for Testing Materials.

Judge O’Marra agreed with the defendant that the speed bump meets the standard required for walking surfaces and in this case did not have to be painted solid yellow. Instead, the speed bump “provided advance warning of the raised pavement surface making it readily visible to prudent road users.”

Cannito argued – unsuccessfully as it turns out – that Madison Properties failed to exercise its “duty of care” stipulated in the Ontario Occupiers’ Liability Act, which requires owners, tenants and property managers to make sure visitors are “reasonably” safe when they are on the property.

The standard of care is depends on the circumstances, Judge O’Marra wrote.

Cannito did not specifically recall exactly where she tripped and fell. She had returned to the plaza two weeks after she fell, with her son-in-law and a camera. After seeing a speed bump – which she alleged had a “missing piece” – she took photos of the site.

The plaintiff “can only advance a theory, based on her subjective belief that she tripped either on the speed bump or ‘maybe’ it was because of a ‘broken’ or ‘missing piece’, for which no objective evidence exists proximate to the time of the trip and fall,” O’Marra wrote. “There is no objective evidence presented that connects the plaintiff’s fall with any deficiency of the speed bump markings or its condition at the time of her fall. Speculative theories are insufficient to establish liability.”

O’Marra cited Nandlal v. Toronto Transit Commission, released in 2015 by the Court of Appeal for Ontario.

Mazie Nandlal broke her clavicle Nov. 8, 2008 after tripping and falling at the Kennedy transit station. She was walking downstairs, towards the subway platform, after disembarking from the Scarborough Rapid Transit above-ground train.

Nandlal lost on appeal. There was an “uncontradicted” sworn affidavit, from a TTC caretaker, that he believed he performed his maintenance duties the day that Nandlal fell by checking the entire subway station for hazard, Judges Eleanore Cronk, Eileen Gillese and David Brown of the Court of Appeal for Ontario wrote in Nandlal in 2015.