Nearly 2,400 homes in Quebec have been flooded following the spring melt in the province, according to statistics released early Monday morning by the provincial government.

The flooding has resulted in the evacuation of more than 1,500 residents. The city of Ste-Marie was particularly hard-hit, with 974 homes flooded and 500 residents evacuated. Beauceville saw 300 flooded homes, but only two evacuations, while the municipality of Vallée-Jonction saw 200 homes flooded and 50 evacuations. Media reports also said one woman died after rising waters washed out the road she was driving on. 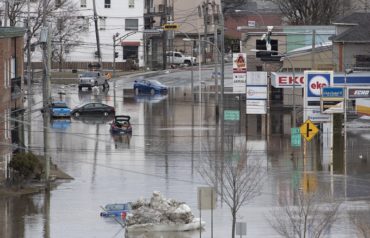 Flooded cars sit in the flooded main road, Tuesday, April 16, 2019 in Beauceville Que. The Chaudiere River flooded and forced the evacuation of 230 buildings and 36 people. THE CANADIAN PRESS/Jacques Boissinot

Rising waters on rivers, caused by moderate rainfall and thaw from rising temperatures, prompted localized flooding, Aon’s Impact Forecasting said in its Weekly Cat Report, released Friday. Ice jam broke on the Chaudière River near Beauceville on Apr. 16, resulting in inundation of parts of the town. At the time, about 300 buildings, including 230 homes were flooded, along with multiple streets and businesses. The Canadian Press reported Monday that some 800 Canadian military personnel have fanned out across Quebec, filling sandbags and aiding evacuations.

Total economic and insured losses could potentially be high. Consider the impact of basement flooding alone: the Intact Centre on Climate Adaptation said in a recent study that the average price to repair a flooded basement was $43,000 in 2018. And according to Centris, a technology provider for Quebec’s real estate agents, the average median price of a single-family residential dwelling in the province is $253,000.

Quebec was not the only province affected by spring flooding. In New Brunswick, water levels in the St. John River Basin were beyond flood stage in several areas and the province’s Department of Transportation and Infrastructure reported 35 road closures as of Monday. The Canadian Press reported there were some flooded basements in Fredericton, where up to 200 homes had been affected by the rising river.

Quebec has been involved in all five catastrophes so far this year, and N.B. in two, Laura Twidle, director of catastrophic loss analysis with CatIQ, said Monday. N.B. has also been in one notable event. All events have been mainly caused by water/flooding, except one with wind as the main peril.

Rising flood waters are expected to increase throughout Quebec this week, the province’s public security minister said Monday. In New Brunswick, officials said Monday they were encouraged by the latest flood forecast, which has water levels stabilizing in Fredericton and on the upper reaches of the St. John River.