Spurt of vegetation growth contributes to California wildfires: Munich Re

With deadly wildfires destroying more than 3,500 properties north of San Francisco, Munich Re is warning that “prime wildfire conditions” may continue in California this winter. 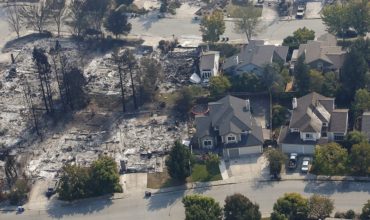 Burned out homes are seen next to homes that survived the flames of a massive wildfire in the Coffey Park area Wednesday, Oct. 11, 2017, in Santa Rosa, Calif. Wildfires whipped by powerful winds swept through Northern California sending residents on a headlong flight to safety through smoke and flames as homes burned. (AP Photo/Rich Pedroncelli)

“Over the past decade, the United States has seen an uptick in the frequency of wildfires that have caused significant insured property losses,” stated Mark Bove, Munich Reinsurance America’s senior research scientist, underwriting services, in a release Thursday. “This is mostly a function of new development in areas that are highly vulnerable to wildfires.”

The Associated Press reported Wednesday that wildfires in Northern California had killed 21 people and destroyed more than 3,500 homes and businesses.

Quoting the state’s forestry and fire protection department, AP reported that 22 wildfires were burning Wednesday in Northern California, up from 17 on Tuesday.

The American southwest and California “have become drier over the past century as well due to Earth’s changing climate, increasing the probability of severe wildfires occurring,” Bove stated. “The threat of a catastrophic wildfire season in California was, ironically, exacerbated by the heavy, drought-ending rains that the state received during the winter of 2016-2017.”

This is because the rain “caused a spurt of rapid vegetation growth” but the rain by spring, Bove suggested.

“Looking ahead, some models are predicting La Niña conditions in the tropical Pacific this winter, which would lead to a drier California, meaning that prime wildfire conditions may continue into this winter,” Bove stated. “However, if it does rain, the burned areas will be at enhanced risk for landslides as the vegetation and roots keeping the soil in place are gone.’

Swiss Re reported in early 2017 that California was the location of the costliest wildfire on sigma records, which was the 1991 Oakland Hills disaster. That gave rise to $3 billion in insured losses, adjusted for inflation to 2016 U.S. dollars, Swiss Re said in Natural catastrophes and man made disasters in 2016, a report released in early 2017. The second most expensive wildfire to the industry on sigma records affected Alberta in 2016, with US$2.8 billion in insured losses. A.M. Best Company Inc. reported earlier that the 2016 Alberta wildfire (which resulted in the evacuation of the entire city of Fort McMurray) was the most expensive disaster to the Canadian insurance industry so far.

“Scientists expect an increase in both the frequency and the severity of wildfires as a result of climate change, with warmer and drier climates providing favourable conditions for burning,” Swiss Re said in Natural catastrophes and man made disasters in 2016. “Insured losses from wildfires have been growing since 1980, and this is likely to continue as exposures in wildfire-prone regions continue to increase given expanding populations, the building of more property and infrastructure, and the possible effects of changing climates such as warmer and drier seasons.”

How hot are the #CaliforniaFires? Here’s a melted alloy wheel. Those melt at 1,220 degrees. The death toll rising, fires still burning. pic.twitter.com/SLbUifncVg

There were no wildfires on Swiss Re’s list of the 40 most costly insured losses from 1970 through 2016. The 40th most expensive event during that period to the industry was the January, 1995 earthquake in Kobe, Japan at US$3.9 billion, adjusted for inflation to 2016. In addition to Kobe, another five of the most expensive catastrophes were earthquakes, another 17 (including three of the top five) were North Atlantic hurricanes and the Sept. 11, 2001 hijackings by Al Qaeda of four airliners took fifth place. The most expensive event to the industry (as of early 2017), at US$80.7 billion, was Hurricane Katrina in 2005.

In its sigma report on Natural catastrophes and man made disasters in 2016, Swiss Re also ranked 40 catastrophes from 1970 through 2016 by the number of people left dead or missing. Topping that list was a 1970 storm and flood with 300,000 victims, affecting Bangladesh. Another three were water events also affecting Bangladesh while 22 were earthquakes centred in Asia. Placing tenth was a 2010 heat wave affecting Russia and the Czech Republic (with more than 55,000 victims and US$1.6 billion in insured losses) while the 33rd most deadly event was the December, 1984 release of toxic gas from the Union Carbide plant in Bhopal, India, with 6,000 victims.

Nightmare images of Northern California wildfires as #napafire–carried around by strong winds–grew and spread from 200 to 20,000+ acres. pic.twitter.com/PAaOLTRPeQ

1 Comment » for Spurt of vegetation growth contributes to California wildfires: Munich Re