Risk awareness is severely lacking and not enough attention is being paid to quake risk in eastern Canada, a region with “huge” loss-inflicting potential that a Swiss Re model projects could produce the country’s largest nat-Cat loss ever if the same magnitude 7.3 quake that occurred in the past happened today. 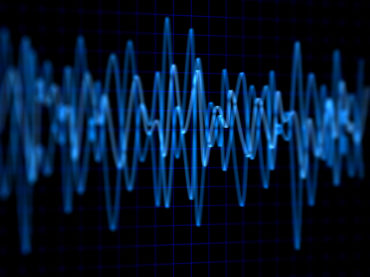 The company’s in-house model indicates a magnitude 7.3 earthquake in Quebec’s Charlevoix seismic zone would spur estimated total damage to residential property of $10.6 billion, “with a 25% probability that the losses could exceed $14.4 billion,” notes Earthquake risk in eastern Canada: mind the shakes, released Tuesday by Swiss Re.

“A repeat today of the magnitude 5.8 earthquake in the City of Montreal in 1732 would lead to even higher losses, estimated at $45 billion,” from residential buildings alone, the report states.

Among the factors contributing to the modelled loss estimate is that Ontario and Quebec serve as home to most of the east’s population; as such, there a concentration of economic assets; and most residential property in eastern Canada pre-dates the latest building code guidelines.

Simulating thousands of potential earthquakes across target areas, the model estimates the resulting physical damage and calculates both economic and insured financial losses for a given portfolio of building stock. The loss estimate assumes a province-wide residential building stock portfolio with a value of about $1.2 billion.

If damage to commercial, cultural and heritage property, infrastructure and indirect losses was also taken into account, the study points out, “the total economic loss from the earthquake would be close to 8% of Quebec’s GDP, or $30 billion, making it the costliest natural catastrophe event ever in Canada.”

“Historically, the Charlevoix-Kamouraska seismic zone along the St. Lawrence River, approximately 100 km east of Quebec City, has seen the most quake activity,” the report notes, with eastern Canada witnessing a magnitude 5 or more quake every four to five years.

Compared to British Columbia, “the region’s vulnerability deserves like recognition,” the report emphasizes.

“Earthquakes in the east tend to be of lower magnitude than in the west, but their loss-inflecting potential, particularly in southern Quebec and eastern Ontario, is huge,” it notes, noting that Montreal, Ottawa and Quebec City are all located in the most quake-prone regions of Ontario and Quebec. 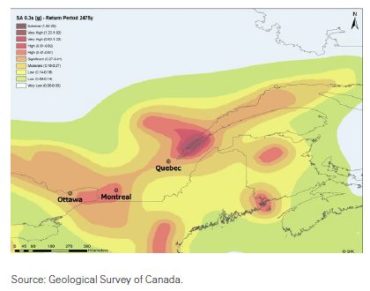 “Given the high exposures of people and property assets, economic losses from an earthquake in these areas could by default be high,” Swiss Re states. “A medium-strength earthquake striking close to one of these major urban centres would be the most destructive disaster the country has yet experience.”

While new buildings must comply with the 2005 building code, “around 90% of existing residential stock pre-dates those provisions,” note the study findings. That said, such codes provide minimum safety construction standards only, not targets as often interpreted by structural engineers.

“Old construction style, such as unreinforced masonry, is particularly vulnerable to earthquake shocks, and is common among the many heritage and vintage buildings eastern Canada is famous for. In addition, buildings constructed on soft soils – like some in Quebec City, Ottawa and Montreal – are more vulnerable to ground motions,” the report notes.

The eastern Canada region “overall is made vulnerable to earthquake risk by the large landmass areas of exposed rocks that form the Canadian Shield,” it explains. “These rocks are very effective transmitters of the shock waves of an earthquake across wide areas, meaning that ground movement can occur far away form the quake’s epicentre, such as in southern Quebec and eastern Ontario.”

Explaining that quake cover is not normally included in standard homeowner/fire insurance policies (available as an optional rider, but rarely purchased), a typical quake policy would provide for an array of exposures. These include replacement of the damaged buildings and its contents to the costs incurred by inhabitants to reside elsewhere for the duration that their damaged home is unliveable.

However, substantial deductibles apply, meaning that even those with coverage will need to bear some financial losses and likely serving to discourage those who do not have such coverage from purchasing it.

“From the consumers’ perspective, deductible introduce complexity and reduce the perceived value, as they are seen as large up-front payments needed to activate any insurance payouts,” the study findings suggest.

To ensure homeowners have the funds to cover the deductible, “‘save forward’ plans, which require pre-commitment, could be put in place to help households save for the costs of future risk mitigating actions/purchases, or accumulate funds to be able to afford the cash outflow up to the policy deductible value,” it adds.

Insurers and governments alike need to do more to raise awareness of quake risk to help encourage greater take-up, which amounts to a paltry 3.4% of homeowners in the east. “The industry has all the tools required to innovate in product design and distribution to make earthquake cover more affordable and appealing, and so help society become more resilient,” the report contends.

Using data from insurers’ portfolios, Swiss Re reports the estimated value of residential building stock insured for earthquake risk across Quebec is $40.7 billion. Applying the magnitude 7.3 quake scenario to the building stock total, “the insured residential property losses are estimated to be $490 million, or just 4.6% of the economic losses.” 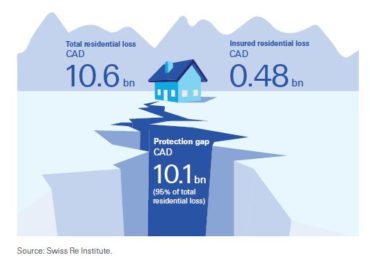 Insurers need to “step up efforts to demonstrate the benefits of insurance as a tool to protect households against the financial distress that could result following a major earthquake,” Swiss Re maintains.

As for government, the lack of public discussion around the hazard is concerning. “The population expects government to set priorities based on assessed risks, and if earthquake risk is not spoken of nor prepared for, it follows that the public does not perceive of the risk as being very real or imminent,” the report notes.

Given the low take-up of insurance, the consequences of an earthquake in eastern Canada could also extend to mortgage defaults, Swiss Re explains. “Mortgages in Canada are typically full recourse, meaning that even if a bank forecloses on a home, the borrower remains responsible for the debt,” the company adds.

Citing figures from Statistics Canada that the average mortgage burden is $137,000 per household and the average household income is $55,200, “it is easy to see that without cover for earthquake risk, many households are financially exposed to major seismic event,” the report cautions.

Based on a loan-to-value ratio of 45% on the average building value of $227,000, it estimates 47% of Quebec residents with a loan today “would have loan-to-value ratio of more than 80% if they tried to leverage up their house for an additional $100,000. As a result, they would either not be eligible to receive additional credit, or the credit would come with additional conditions, such as mandatory credit default insurance.”

Quake-triggered “mortgage impairment and further credit contagion risk are currently not accounted for on any balance sheet (private or public), nor properly assessed to contain contagion,” Swiss Re notes.

Credit default mutualization – defined as the sharing and/or transfer of credit default risk in a mutual-type insurance arrangement – “has the potential to accelerate contagion effects in a highly systemic scenario as an earthquake, putting more Canadian at financial disadvantage, even if not directly impacted by the earthquake,” the company adds.

Related: Mobile earthquake simulator to visit Quebec in May and June

Noting that quake policies are available in Quebec, Swiss Re reports that an average home protection can be bought at an additional cost of $200 or less a year, depending on location.

“This is less than 0.4% of average annual household income in the area. Given that earthquake is an insurable risk, it is not clear what kind of public assistance would be available to homeowners who suffer quake damage,” the report states.

“Insurance products for homeowners are readily available, and at moderate prices compared to other insurance products,” Swiss Re states. “For an individual household, these products can mitigate bankruptcy risk very effectively, and reduce dependency on governmental emergency funds.”

The insurance industry, with its capital and risk assessment know-how, “can make a valuable contribution” to building increased awareness of the benefits of insurance as a loss absorber in the event of major disasters.

Government and industry alike must “continue to raise public awareness of the earthquake hazard and the benefits of disaster mitigation,” Swiss Re emphasizes. “To do so requires more meaningful and easy-to understand communication to homeowners about the hazard.”

“This can be done through messaging with contextual information that provides consumers with an opportunity to consider the event in a familiar context that evokes acknowledgement of personal vulnerabilities,” it suggests.

In addition, mobile devices can raise awareness through alarm systems and emergency protocols. “They can also improve insurance product distribution by lowering the cost of issuing and tailoring a policy to a customers’ specific needs.”

The report cites a number of solutions that have been implemented in different parts of the world to narrow the quake protection gap, including the following:

The financial fallout from earthquakes extends well beyond property damage and can disrupt economic activity more broadly, the report emphasizes. “If no back-up plans exist, or when plans are not based on cascading event scenarios, damage to physical assets can reduce productive capacity, while damage to critical infrastructure such as road and utilities can disrupt logistics and other operations.”