FREDERICTON – More than 80,000 customers were still without power in many parts of New Brunswick early Thursday after a blustery mix of freezing rain, ice pellets and strong winds moved through the Maritimes. 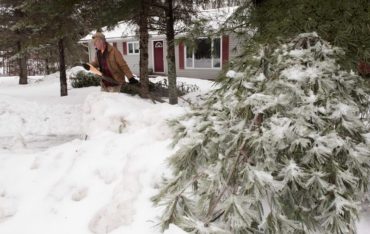 Joe Jodoin clears a broken branch from the tree in front of his daughter’s house in Fredericton, Wednesday, January 25, 2017. Freezing rain, rain, ice pellets and snow fell on New Brunswick overnight into Wednesday causing the loss of power to over 100,000 customers. THE CANADIAN PRESS/Stephen MacGillivray

NB Power said at the height of the storm, more than 130,000 customers were affected Wednesday. Much of the outages Thursday were in a band that ran down the eastern edge of the province and into southern communities.

The freezing rain pelted much of northern New Brunswick, closing schools throughout the province Wednesday and Thursday.

The storm also moved into P.E.I. and Newfoundland, bringing freezing rain from west to east through the night.

In Newfoundland, power outages were being reported in the St. John’s, Burgeo and St. Thomas Line areas, while roads were clogged with slush and water buildup.

A rainfall warning has now been issued for St. John’s and surrounding areas, with 25 mm already down and another 10 mm to 15 mm expected. The heavy rains were causing flooding in some areas.

Power was also off at the Marine Atlantic terminal in Port aux Basques and it is affecting some ferry crossings. Schools are closing in central Clarenville and on parts of the Avalon, but there were no school closures in St. John’s.

Labrador was also getting heavy snow, with the Goose Bay area expected to get about 25 cm.