COLLINGWOOD, Ont. – Hydro One is reporting thousands of customers without power after intense storms rolled through parts of central and eastern Ontario on Monday. 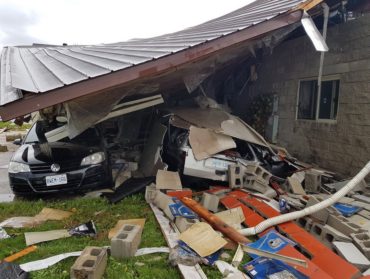 More than 10,000 Hydro One customers were without power as of midnight on Monday. Photo: @ElyeaTrent.

The utility’s website showed more than 10,000 customers without power as of midnight on a line from Georgian Bay through the Owen Sound area and southeast to the Kingston region.

Collingwood appeared to bear the brunt of the storm and provincial police say a number of buildings were damaged.

OPP say trees and wire also came down in the storm and were advising motorists heading to take care as lights were out at many intersections. They also advised people to remain at home crews worked to removes trees and wires from area roads.

No injuries have been reported.

While the storm system leaves the area, a mass of warm air will remain behind. Environment Canada says much of southern Ontario can expect highs in the upper 20s on Tuesday, with a humidex reading that will make it feel like the low 30s.

More roof damage in Collingwood. Powerful winds cut through here, but tornado or not? Unsure at this time.#onstorm pic.twitter.com/FN441Ndtwl

Roof has blown off of Col-Can Service Centre in #Collingwood and there is a gas leak on Ronnell Cr. @NewsBayshore pic.twitter.com/5bkSsjCV5q

Bit of a breeze here in #Craigleith #Collingwood #onstorm pic.twitter.com/Vye0JxKwjq

At the peak, 40,000 customers were without power, by midnight crews restored 29,000. Crews continue restoration efforts for 7,000 #ONstorm