BELLA BELLA, B.C. – Officials say booms containing a fuel spill from a sunken tug off British Columbia’s central coast have been replaced, but clean up crews continue to face harsh weather as they attempt to work in the area. 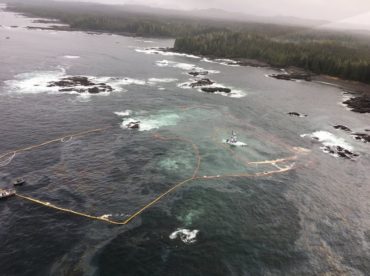 The tug had 220,000 litres of fuel on board; less than half has been recovered. Photo: @cbcerchris.

A report on the downed Nathan E. Stewart says crews worked Saturday to replace sections of boom that broke apart amid three-metre-high waves and gale force winds on Friday.

It remains unclear how much fuel spilled into the ocean as a result, but the tug had 220,000 litres on board when it ran aground and sank about 20 kilometres west of Bella Bella on Oct. 13, and less than half that amount has been recovered.

Marilyn Slett, chief of the Heiltsuk First Nation, has said her community is in a state of shock over the incident and questions why more seaworthy booms weren’t installed after the tug boat initially sank.

The latest situation report says crews are expected to skim the water’s surface to collect fuel on Sunday, and they also plan to install another boom around the spill.

Environment Canada says a storm warning remains in effect for the area, with warnings of gale force winds, which have forced workers to stand down in recent days.