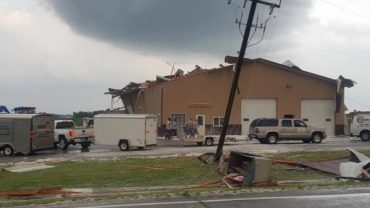 A tornado struck the town of Watkins, Minnesota on July 11. Photo: Melonie Yanish.

Audrey Schoenberg took shelter at a restaurant in Litchfield, Minnesota, after a tornado Monday flipped her home off its foundation.

“I’m numb. I’m numb. I don’t know really what I do feel right now. It’s quite a shock to see that everything is gone,” she said.

Authorities said the tornado damaged up to 20 homes in the area. Keith Johnson, the mayor of Litchfield about 70 miles west of Minneapolis, said there was serious damage, but that no one was injured.

“I’ve lived in this town 52 years and I’ve never seen a storm like this in our community,” Johnson said.

Trailers no match for Monday's tornado that hit Litchfield. pic.twitter.com/hVYoFqj0kN

Diane Kelbing told KARE-TV that she and her husband raced to their mobile home park shelter when they heard the tornado warning siren.

Fifty residents were removed from the Hilltop Health Care Center in nearby Watkins after the home lost part of its roof. The American Red Cross said it is assisting the evacuees.

Storm near Kimball earlier this evening. Photo send to us by Christina Lynn Strodtman. @stcwx pic.twitter.com/b0AgKTerRd

The storms also washed out sections of highways in northern Wisconsin and closed other roads.

Wisconsin emergency officials said in a news release 33 people were trapped on Michigan Island in Lake Superior. The release didn’t offer any other details but said as of midmorning 20 people had been rescued and rescue efforts were still underway.

A Wisconsin Emergency Management spokeswoman referred questions about the situation to the Iron County Sheriff’s Department. A message left with that agency wasn’t immediately returned.

The Ashland County Sheriff’s Office urged against travel in the county because many local roads were flooded. Sections of U.S. Highway 2 and state Highway 13 south of Highbridge were closed Tuesday.

The National Weather Service said more flooding was likely in northern Wisconsin, where rivers and creeks will continue to rise over the next two days. Areas around Danbury to Minong, Hayward, Ashland and Hurley are expected to experience the most significant flooding.

In Minnesota, the storms also generated a deluge of heavy rain causing the Crow Wing County Sheriff’s Office to advise against travel late Monday because of flooding. In St. Cloud, powerful rain flooded streets and left some motorists stranded in high water. In a Baxter industrial park, a foot of water covered the roadways. The National Weather Service reported 11 inches of rain fell in the east-central Minnesota city of Sturgeon Lake.

The town of Watkins, #Minnesota was impacted by a #tornado this evening. Photos: Melonie Yanish pic.twitter.com/gi5WK0eG03

Tornado damage in Litchfield. This is the NW corner of the city. Lots of damage to homes. pic.twitter.com/h3QUTcdGHy