String of wildfires in British Columbia believed to be arson, BC Wildfire Service says

Investigators with the BC Wildfire Service and provincial natural resource officers have found evidence to suggest at least 10 separate wildfires in three distinct areas have been deliberately set. 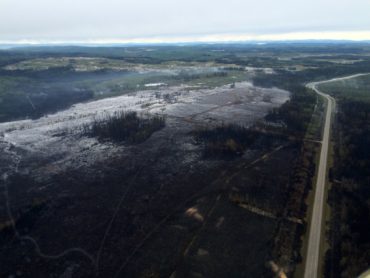 Investigators in British Columbia have found evidence to suggest at least 10 separate wildfires have been deliberately set. Photo: BC Wildfire Service.

Extra conservation officers have been brought in to help with the investigation into the fires, which are believed to be connected, the Ministry of Environment said in a press release on Monday. Some property damage has occurred, but there have been no reports of injuries so far, although some fires continue to burn.

The British Columbia Conservation Officer Service is asking for the public’s help to solve the string of suspected wildfire arsons in the Peace region.

The BC Wildfire Service said that, as of Saturday, it was responding to 55 wildfires throughout the Prince George Fire Centre, 49 of which were in the Peace region. Compared to the 10 year average, the Prince George Fire Centre has had nearly three times the amount of fires normally seen at this time of year with over seven times the amount of hectares burned, the Ministry of Forests, Lands and Natural Resource Operations said in a statement. “These incidents have been caused by people, with the majority due to open burning,” the statement said.

Also, on Friday, two incidents were reported related to the unauthorized use of unmanned aerial vehicles near active wildfires were reported. “If necessary, the BC Wildfire Service will work with police to locate drone operators violating these rules and suspend their operations,” the statement said.

#Arson believed to be behind at least 10 wildfires in northeastern BC. #BCWildfires
https://t.co/80xCm2qGB3

#BCwildfire crews had a chilly morning in the Peace region! Precip. & snow didn't extinguish fires but is a reprieve pic.twitter.com/o4WCLt6sbn

Aerial footage of Siphon Creek #BCwildfire from May 3. For latest updates: https://t.co/dKUCKyP8J2 pic.twitter.com/nXqdCvhW4s

Would your home survive a #BCwildfire? Find out: https://t.co/196WNlGSGt pic.twitter.com/6ePlUne2NZ