Student charged in cyberattack on 304 computers at University of Alberta

EDMONTON – A University of Alberta student is facing numerous charges after a cyber-attack on university computers. 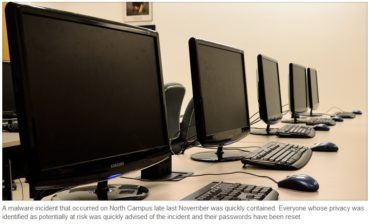 The university says on Nov. 22 it found malware on 287 computers, which potentially affected more than 3,300 faculty, staff and students.

It says it sent an email notification to those whose passwords were identified as potentially at risk and advised changing the passwords.

On Dec. 8, malware was found on another 17 computers and affected 19 students.

The university said after the second discovery of malware, the IT department made all 3,323 users who were affected change their passwords.

“All individuals potentially affected by the information security incident were advised promptly and in accordance with the university’s procedures and best practices,” the university said in a release on its website.

The university said the malware was installed on computers in 20 classrooms and labs in the Library Knowledge Commons, Computing Science Centre and in the Centennial Centre for Interdisciplinary Science.