NEW ORLEANS – A suspected tornado near Birmingham, Alabama, flattened businesses and injured one person Thursday, while the mayor of a coastal Louisiana town urged residents to evacuate ahead of a rising tide – two lingering effects of a weakening Tropical Depression Cindy that was fueling harsh weather across the Southeast. 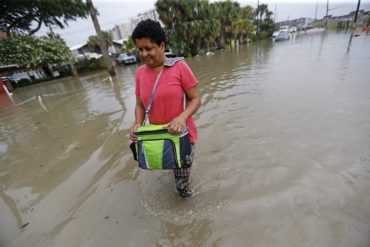 Esther Martens walk through a flooded roadway to get to her car in the West End section of New Orleans, Wednesday, June 21, 2017. Tropical Storm Cindy formed Tuesday in the Gulf of Mexico, hovering south of Louisiana as it churned tides and spun bands of heavy, potentially flooding rain onto the central and eastern Gulf Coast. (AP Photo/Gerald Herbert)

A liquor store and a fast-food restaurant were among the damaged businesses in Fairfield, Alabama, west of Birmingham, said meteorologist Jason Holmes of the National Weather Service. Dean Argo, a spokesman for the Alabama Alcoholic Beverage Control Board said one employee of the liquor store was hurt.

Holmes also told The Associated Press that trees were down and buildings were reported damaged along the Interstate 20 corridor on the western outskirts of Birmingham, Alabama’s most populous city. The weather service had issued tornado warnings earlier for the Birmingham and Tuscaloosa areas, and Gov. Kay Ivey had urged state residents to be alert for dangerous weather.

Meanwhile, the Gulf Coast was still suffering the effects of Cindy, a former tropical storm that crawled ashore from the Gulf of Mexico early Thursday near the Louisiana-Texas state line. Downgraded to a tropical depression, Cindy was weakening as it headed north through Louisiana toward Arkansas but a broad circulation around the system swept moist Gulf air over the South, fueling bands of strong weather and pushing up coastal tides.

In the low-lying Louisiana town of Lafitte, south of New Orleans, Mayor Tim Kerner urged residents in and around the town to seek higher ground because of rising water.

“The tide’s rolling in. It’s getting to a dangerous level,” Kerner said. Streets and yards in the town were covered and Kerner worried that homes, even those in parts of town protected by levees, might be flooded. “I’m hoping not,” he added.

“Certainly it’s not been as bad as we feared. That’s the good news, Louisiana Gov. John Bel Edwards said in Baton Rouge. “The bad news is it’s not over yet.”

As a slow-moving tropical storm that formed Tuesday in the Gulf, Cindy was blamed for one death: authorities said a 10-year-old Missouri boy vacationing with his family on the Alabama coast was struck by a log washed in by a large wave. Cindy also caused widespread coastal highway and street flooding and several short-lived tornadoes, but no other deaths.

In Louisiana, Edwards said two fishermen who were reported missing in coastal St. Mary Parish were located and rescued Thursday morning. Off Texas, the U.S. Coast Guard helped the four-member crew of a shrimp trawler limp back to shore at Freeport after the crew radioed in distress amid fears of sinking early Wednesday.

Authorities warn driving rains could still cause dangerous flash floods. “That continues to be the threat,” said Ken Graham, of the National Weather Service Office near New Orleans. “Not only around the centre of Cindy. The impact of rain can be hundreds of miles away.”

Heavy rain was forecast to spread over the Tennessee and Ohio valleys on Thursday, then move Friday and Saturday into the central Appalachians. At 10 a.m. CDT Thursday, Cindy was about 165 miles (265 kilometres) northwest of Morgan City and moving to the north at 13 mph (20 kph).

National Weather Service forecasters said the storm had dumped from 2 to 10 inches (50 to 250 millimeters) of rain on various spots along the Gulf Coast from southern Louisiana to the Florida panhandle as of Wednesday. Jim Stefkovich, a meteorologist with the Alabama Emergency Management Agency, said some parts of coastal Alabama got a foot of rain. “We are not done with the threat yet,” Stefkovich added.

In southwest Louisiana, not far from where Cindy came ashore before dawn, motorists in trucks drove through knee-high water in the streets of Cameron Parish – but there was no serious flooding. “We haven’t heard of water getting into homes,” said Ashley Buller, an assistant in the parish emergency office. “Mostly a few downed trees, power outages.”

Doesn't take much for storm surge from Tropical Storm Cindy to cause flooding in Lake Charles, LA – @JimCantore live on @weatherchannel pic.twitter.com/k8EjzclRhw

The Mississippi coast received some of the heaviest rain. In Gulfport, Mississippi, Kathleen Bertucci said heavy rains Wednesday sent about 10 inches (250 millimeters) of water into her business selling granite countertops. “It’s pretty disgusting, but I don’t have flood insurance because they took me out of the flood zone,” said Bertucci, whose store is near a bayou.

Some threats could be lurking in the flood waters, Alabama state officials warned in a statement that floating colonies of fire ants could form in the gushing surge of water.

And in Ocean Springs, Mississippi, there was another worry in a neighbourhood where streets and a few homes had flooded Thursday.

“One of our safety concerns is alligators,” said local neighbourhood watch organizer Erin West. “We have several alligators in the nearby ponds and it’s springtime and they like to move around during springtime and everything.”