Swiss Re estimates losses from recent hurricanes, Mexico earthquakes at US$3.6 billion

Swiss Re has estimated its preliminary combined losses from Hurricanes Harvey, Irma and Maria and the earthquakes in Mexico to be approximately US$3.6 billion, net of retrocession and before tax. 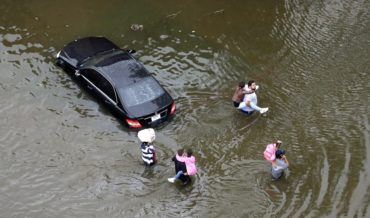 In this Aug. 29, 2017, photo, residents wade past a flooded car as they evacuate their homes near the Addicks Reservoir as floodwaters from Tropical Storm Harvey rise in Houston. Texas Attorney General Ken Paxton offered a consumer alert on Wednesday, Sept. 27, warning potential used car buyers that as many as 1 million vehicles flooded during Hurricane Harvey. In Texas, a seller is required by law to tell prospective buyers about vehicle damage. If it’s from flooding, the words “Flood Damage” must be on the vehicle’s title. (AP Photo/David J. Phillip File)

“The foregoing estimates are subject to a higher than usual degree of uncertainty and may need to be subsequently adjusted as the claims assessment process continues,” the insurer and reinsurer cautioned in the release.

On Thursday, the National Insurance Crime Bureau (NICB) in the United States reported that some 23,000 flooded vehicles are awaiting processing and retitling to be auctioned off for parts or to be scrapped. “That is just one of several insurance industry salvage locations where more than 422,000 insured vehicles damaged by Harvey have been taken for processing,” the NICB said in a statement, adding that these totals surpass the number of claims that resulted from Hurricane Katrina (approximately 300,000) and from Superstorm Sandy (250,500).

In addition, more than 215,000 claims have been filed following damage to vehicles from Hurricane Irma in Florida, reported NICB, which partners with insurers and law enforcement agencies to facilitate the identification, detection and prosecution of insurance criminals.

In addition to Swiss Re, a number of other insurers and reinsurers have released loss estimates from Hurricanes Harvey, Irma and Maria, including Aspen Insurance, Lloyd’s (which said that it has already paid US$738 for the hurricanes), Everest Re, Axis Capital, Arch Capital, XL Group and Markel.

Most recently, on Thursday, Zurich Insurance Group estimated aggregated claims in the third quarter related to the hurricanes to be approximately US$700 million net of reinsurance and before tax. While final loss assessment will take time to complete due to the nature of the events, Kaspersky said in a statement, after tax, losses are expected to be about US$620 million. Zurich does not expect to incur any reinstatement costs for reinsurance in relation to the third-quarter events. The third quarter also saw a number of other smaller events and the company’s Farmers Re business is expected to incur a loss in relation to the three hurricanes of US$17 million net of reinsurance and before tax.