Swiss Re has reported a net income of US$1.2 billion in Q1 2016, down from US$1.4 billion reported in the prior-year period, but “supported by solid underwriting and strong investment results.” 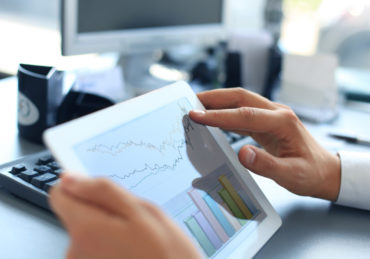 Net income for Property and Casualty Reinsurance was US$587 million, down from US$808 million in Q1 2015. Swiss Re attributed the P&C Re results to “good underwriting and continued benign natural catastrophe experience and higher realized gains, partly offset by unfavourable prior-year developments.” The combined ratio for P&C Re was 93.3% in the first quarter of 2016, compared to 84.3% in the first quarter of 2015. Swiss Re noted that net premiums earned increased 5% in Q1 2016 to US$4 billion, up from US$3.8 billion in the prior-year period. At constant exchange rates, premiums earned increased by 8.9%, mainly driven by large transactions in the United States and Europe.

The report added that the specialty combined ratio increased to 76.7% for Q1 2016, compared to 68.4% in Q1 2015, impacted by overall less favourable prior accident year development, particularly a credit loss in Spain. [click image below to enlarge] 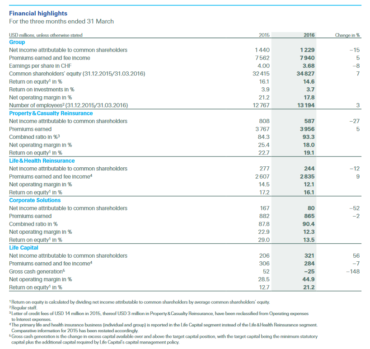 As well, premiums earned and fee income for the Group totalled US$7.9 billion for the first three months of 2016, up from US$7.6 billion for the same quarter of the previous year.

Corporate Solutions achieved a net income of US$80 million in the latest quarter, compared to US$167 million in Q1 2015. The segment had a combined ratio of 90.4% for the first three months of 2016, up from 87.8% for the same period in 2015. “The 2016 result was driven by profitable business performance across most lines of business and moderate income from investment activities, partially offset by realized losses from insurance in derivative form, due to the continued impact of the unseasonably mild winter,” Swiss Re said in a statement.

“The overall environment remained challenging during the first quarter, in which low interest rates and declining reinsurance prices continued to make their mark on the entire industry,” Swiss Re’s Group chief executive officer, Michel M. Liès, said in the statement. “However, our strategic framework helped us navigate these market pressures.”

Liès said in the statement that “in the first quarter of 2016, we have – once again – demonstrated our resilience in a soft market. I expect that we will continue to operate amid a challenging environment throughout the year – but this plays to Swiss Re’s strengths.” He added that “closing the protection gap remains a priority and this is why the fundamental demand for insurance remains intact – creating new opportunities across all lines of business. I am confident that Swiss Re is well positioned to continue to deliver sustainable results and capture attractive business opportunities going forward.”