Swiss Re has reported a net income of US$3 billion for the first nine months of 2016, with all business units contributing to the result, “despite the difficult market environment.” 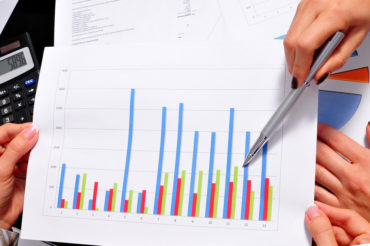 The net income results, released on Thursday, compared to US$3.7 billion for the same period in 2015. “Net income was supported by large and tailored transactions and a strong investment result, partially offset by losses from large natural catastrophes and a difficult market environment,” Swiss Re said in a statement.

Net income in Property & Casualty Reinsurance was US$1.5 billion in the first nine months of 2016 ending Sept. 30, down from US$2.3 billion in the same period in 2015, “after higher natural catastrophe losses, particularly in the second quarter, and lower favourable prior-year developments.” Net premiums earned increased 11.8% to US$12.7 billion (vs. US$11.4 billion), driven by “large and tailored transactions” in the United States and Europe. P&C Re also reported a combined ratio of 93.8% for the first nine months (vs. 84.5% in 9M 2015). “The increase was mainly driven by higher a large loss burden due to the wildfires in Fort McMurray, Canada, a series of agricultural losses in Europe, softening market conditions, and less favourable impact from prior accident years compared to the year before,” Swiss Re said in the statement.

Life & Health Reinsurance net income was US$635 million, compared to US$781 million in 9M 2015. Premiums earned and fee income for the first nine months increased 8.7% to US$8.5 billion (vs. US$7.8 billion for the prior-year period), driven by higher premiums in all regions from new business as well as large in-force transactions, particularly in the U.S., Swiss Re reported.

Corporate Solutions reported net income of US$150 million from US$337 million in 9M 2015. “The 2016 result was impacted by large man-made casualty losses, offset by profitable business performance across most other lines and income from investment activities,” the statement said. Premiums earned increased 2.9% to US$2.6 billion in the first nine months of 2016, driven by the IHC Risk Solutions acquisition, which was completed in the first quarter of 2016. The combined ratio increased to 99.3% in the first nine months (vs. 91.2% in 9M 2015). 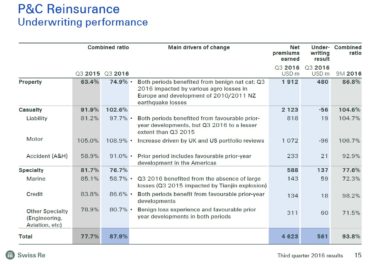 Life Capital reported net income of US$726 million, up drastically from US$273 million in the first nine months of last year, “attributable to investments and underlying growth,” the statement said. The increase in net income was driven by investment performance and solid underlying business performance, Swiss Re reported. Premiums earned and fee income in the first nine months rose to US$898 million from US$825 million in 9M 2015.

“We delivered strong earnings in the first nine months, despite a continued difficult environment across the entire industry,” said Swiss Re Group CEO Christian Mumenthaler in the statement. “Our results once more demonstrate that our underwriting discipline and our differentiation position us well for long-term success.”

For the three-month period ending Sept. 30, net income for P&C Reinsurance was US$678 million compared to US$1 billion in Q3 2015, “after a series of agricultural losses in Europe, lower prior-year development and as a result of the softening market conditions.”

“Despite continuous market pressures, we reported a strong net income in the third quarter, driven by investment income and solid underwriting,” said Swiss Re Group chief financial officer David Cole in the statement.

More News
Related
Swiss Re reports 2016 net income of US$3.6 billion, P&C Re net income of US$2.1 billion
Net income for Swiss Re US$1.2 billion in 2017 H1, down from about US$1.9 billion in 2016 H1
A.M. Best maintains stable outlook for Canadian P&C industry; financial results strong again in 2015
Largest single loss for Hannover Re in 2016 was the Fort McMurray wildfire, with net cost of 127.9 million euros