DETROIT – Japanese auto parts maker Takata Corp. pleaded guilty to fraud Monday and agreed to pay $1 billion in penalties for concealing an air bag defect blamed for at least 16 deaths, most of them in the U.S. 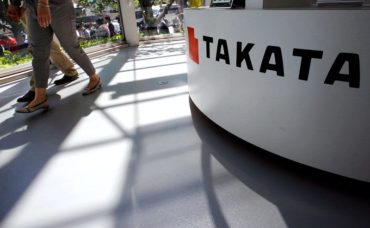 FILE – In this May 4, 2016, file photo, visitors walk by a Takata Corp. desk at an automaker’s showroom in Tokyo. Japanese auto parts maker Takata Corp. is expected to plead guilty in U.S. District Court in Detroit on Monday, Feb. 27, 2017, to a criminal charge and agree to a $1 billion penalty for concealing a deadly air bag inflator problem. (AP Photo/Shizuo Kambayashi, File)

The scandal, meanwhile, seemed to grow wider when plaintiffs’ attorneys charged that five major automakers knew the devices were dangerous but continued to use them for years to save money.

In pleading guilty, Takata admitted hiding evidence that millions of its air bag inflators can explode with too much force, hurling lethal shrapnel into drivers and passengers. Chief financial officer Yoichiro Nomura spoke on behalf of the Tokyo-based company, saying the conduct was “completely unacceptable.”

The inflators are blamed for 11 deaths in the U.S. alone and more than 180 injuries worldwide. The problem touched off the biggest recall in U.S. automotive history, involving 42 million vehicles and up to 69 million inflators.

Penalties in the criminal case include $850 million in restitution to automakers, $125 million for victims and $25 million for the U.S. government. Takata’s fine to the government could have been as much as $1.5 billion, but the judge in the case said such a sum probably would put the company out of business.

While Takata’s destruction “would probably be a fair outcome,” it wouldn’t help victims get paid, U.S. District Judge George Caram Steeh said in accepting the deal negotiated with the U.S. Justice Department.

Takata’s penalty is small compared with the one imposed on Volkswagen, which must buy back cars and pay up to $21 billion over its emissions-cheating scandal. Steeh said he would pick a person to administer the restitution funds this week. Kenneth Feinberg, who handled the General Motors ignition switch and BP Oil spill compensation funds, is being considered.

Takata’s inflators use ammonium nitrate to create a small explosion that inflates air bags in a crash. But when exposed to prolonged high temperatures and humidity, the chemical can deteriorate and burn too fast. That can blow apart a metal canister.

In the U.S., 19 automakers are recalling inflators. Worldwide, the total number is over 100 million.

The costs of the recalls have saddled Takata, which also makes seat belts, with two straight years of losses. Lawyers acknowledged in court that the company will have to be sold to fund the agreement. Separately, three former executives are charged with falsifying test reports. They remain in Japan.

Steeh rejected pleas by lawyers for plaintiffs in lawsuits against Takata and automakers to delay the sentencing. They contended language in the plea agreement would help the automakers’ defence because it painted them as victims of Takata’s deception.

“Whether the OEMs (automakers) have a role as culprit in addition to victim is something that can be resolved through the litigation process,” he said.

Plaintiffs in dozens of lawsuits over the defect charged in court papers filed Monday in Miami that Honda, Toyota, Nissan, Ford and BMW had independent knowledge that Takata’s air bags were unsafe before putting them in millions of vehicles.

After an inflator ruptured in 2009, one of the auto companies described the problem as “one in which a passenger protection device was transformed into a killing weapon,” the court filing said. The company was not identified.

The filing marks the broadest allegation yet that automakers knowingly put their customers in danger.

“The automotive defendants were aware that rupture after rupture, both during testing and in the field, confirmed how dangerous and defective Takata’s air bags were,” the plaintiffs’ attorneys said.

The auto companies have asserted that they were deceived by Takata and shouldn’t be held liable.

In Takata’s plea agreement, the Justice Department says Takata got the car companies to keep buying its inflators “through submission of false and fraudulent reports and other information that concealed the true and accurate test results.”

The plaintiffs are suing not only over the deaths and injuries but over what they say is the vehicles’ loss in value because of the defect.

The plaintiff’s filing Monday alleges that Honda, Takata’s biggest customer, was involved in designing Takata inflators, and two of them exploded and ruptured at Honda facilities in 1999 and 2000. Toyota had quality concerns about Takata in 2003, while Ford ignored objections of its own inflator expert. Nissan switched to Takata inflators to save about $4 per inflator, the lawyers alleged, while BMW also sought cost savings.

BMW, Nissan, Ford and Toyota declined comment. Honda said the lawyers’ filing was misleading and an effort to maintain claims for economic losses regardless of Takata’s guilty plea. The company also labeled as false an allegation that it proceeded with Takata inflators for cost reasons while knowing they were dangerous.