Take-up rates low in this line of commercial insurance: Lloyd’s

Is your client’s loss of income covered if the business got interrupted because of a catastrophe that hit a supplier?

That depends on what the policy says and whether the client actually bought contingent business interruption (CBI) insurance. And these days, that doesn’t seem likely, according to a recent report by Lloyd’s.

CBI covers lost business income due to a disruption to the insured company’s supplier network. Business interruption (BI), on the other hand, is when physical damage to an insured’s own assets causes a suspension of business activities and loss of business income.

“The CBI insurance market is still developing, and CBI insurance take-up rates are low,” warns the report, Hidden Vulnerabilities in Supply Chain Risk: A quantitative risk modelling framework, co-produced by Lloyd’s and Verisk Analytics Inc.’s AIR Worldwide unit. “As a result, there are significant differences between economic and insured losses.” 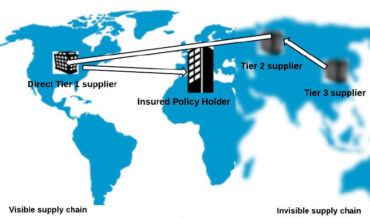 Most insurers provide BI and CBI as an endorsement to a property policy, reports Lloyd’s. Some carriers provide standalone CBI, but some companies do not buy CBI coverage because it is not available or too expensive.

At least two global catastrophes have resulted in multibillion-dollar CBI losses, Lloyd’s notes in its report. First, the 2011 massive earthquake and tsunami that hit Japan; second, the flooding that hit Thailand during the same year.

Computer manufacturers in North America depended on factories to produce hard disk drives (HDD) in the flood-affected areas of Thailand. One HDD maker in particular had a 50% drop in production and 10% decline in market share, Lloyd’s said in the report, which proposes a quantitative risk modelling framework to evaluate CBI risks.

Insurers often make “faith-based” underwriting decisions, said Lloyd’s. Some limit the coverage by covering only named suppliers with a designated waiting period or excluding certain risks in some geographies. “Policies are available for full supply chains, but these are rare, and the supply chain must be simple enough to be fully understood.”

The problem is, executives with most companies do not know who is supplying their suppliers, Lloyd’s warns. Some auto manufacturers have several layers in supply chains on which they depend for tens of thousands of different components needed to make one single vehicle.

Companies can get some visibility into their supply chains by doing things like placing radio-frequency identification (RFID) tags on items, but not all sub-suppliers will necessarily participate, Lloyd’s says.  Current methods of tracking the supply chain take a lot of time and effort. So a vehicle maker might know where its parts are coming from, but not know where the smaller components of those parts – such as bolts, gaskets and wiring – are made. And they may not know from where the metals for those smaller components came.

“As supply chains have evolved and become more complex, insuring interconnected business interruption risks has grown more challenging,” Lloyd’s and AIR said in the report. “With a scarcity of historical claims data and the evolution of unforeseen threats in value chains there are few systematic methods for an insurer or a corporate risk manager to quantify a supply chain’s risk and none that are sufficiently thorough to fully foresee future aggregation scenarios.”