Engineered construction like a drainage route can directly affect whether or not a specific building or home is in harm’s way for stormwater flooding, the Institute for Catastrophe Loss Reduction’s (ICLR) director of research told Canadian Underwriter on Monday. 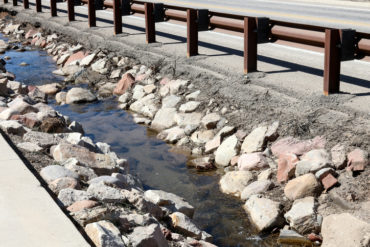 The webinar examines some state-of-the-art modelling practices, where flood hazards exist and how to mitigate them at the local subdivision level.

“This differs from some of the approaches used in the industry that are a bit coarser,” Sandink explained. “These models and approaches are very specifically used for locating drainage routes and understanding if individual homes are at risk.”

Sandink said the webinar will explore mitigation measures both at the subdivision site scale and the lot level, how these measures interact with the identified hazard, and how they can help reduce risk.

Wiens has been analyzing large-scale urban stormwater systems for over 10 years. As part of this work, he has developed methods for estimating surface flooding events and flood routing during extreme rainfall events. He also developed methods for quantification of economic damage to private property as a result of flood damage due to rainfall, river-based flooding and dam breach analysis.

The webinar looks at a case study in which the City of Surrey in British Columbia engaged Associated Engineering to develop numerical models for evaluating flooding from rainfall events and for estimating economic losses due to flooding. The study examined the anticipated changes to rainfall patterns as a result of climate change and evaluated several potential methods for mitigating flood damage to private property.

The webinar covers the following topics: