Tale of two summers: Farmers deal with drought in the east, rain on the prairies

It’s a tale of two summers this year in Canada, with rain – and the lack of it – causing concerns about the state of the country’s crops. 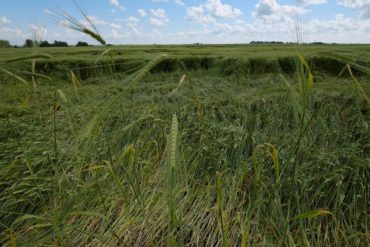 A storm-damaged barley field is shown near Cremona, Alta., on Tuesday, Aug.9, 2016. It’s a tale of two summers this year in Canada, with rain and the lack of it causing concerns about the state of the country’s crops. THE CANADIAN PRESS/Jeff McIntosh

In Ontario, officials are forecasting a strong fruit harvest but add that unusually dry conditions could mean some crops will have smaller yields and costs will be higher for many farmers.

“This year is definitely one of the driest, if not the driest, we have on record for April through July,” said Environment Canada meteorologist Peter Kimbell.

Over that period, weather stations in Vineland and Welland, Ont., measured just 34 per cent and 43 per cent the average amount of precipitation, respectively, putting it and much of southern Ontario in a severe drought situation. Southern Quebec is also abnormally dry.

Nonetheless, Ontario’s Ministry of Agriculture, Food and Rural Affairs says the fruit harvest could be double last year’s – when spring frost hurt apple crops, in particular. That’s despite the fact that vegetables like broccoli, corn and soybeans are struggling in the low-moisture, high-heat conditions the province is facing this summer.

The fruit crop isn’t totally immune to the drought, says Charles Stevens, an apple and berry grower in Newcastle, Ont. and chairman of the Ontario Apple Growers.

He said the lack of moisture has forced many farmers to “hand thin” – picking fruit before it ripens to ensure that the fruit that remains can grow to maturity, which reduces the size of the harvest and drives up costs.

“I heard from a grower who says he’ll be hand-thinning till the moment he starts to pick at harvest,” Stevens said. “That is a huge extra expense in labour. It’s almost like picking the crop twice.”

The story is the reverse in the prairies, where relentless rainstorms in Alberta and Saskatchewan have meant increased risk of rot and disease in what could otherwise be a bumper year.

“Our rain started at the end of June, and pretty much hasn’t stopped since then,” said Daphne Cruise, a Saskatchewan crop specialist.

Cruise says yields are expected to be average to above average, but it’s too soon to say what the sodden fields will mean for the quality of the crop.

“July was very wet and very humid, so of course that is prime weather for disease development,” said Cruise.

She said lentils and other pulses, which farmers planted in big numbers because of the increased price for the crop and their recent popularity among consumers, are most vulnerable to the moisture.

The big rainstorms across the prairies have also brought lots of hail, sometimes the size of tennis balls, something Cruise notes has further damaged crops.

“Pretty much all of July it’s been off and on, anywhere from minimal damage to 100 per cent losses in some cases,” she said.

“The Yorkton area has in the last couple weeks been hit fairly hard with some severe weather as well, with hail and tornadoes and flooding,” said Cruise.

“It’s kind of spotty all over the province. Just with these pop-up thunderstorms you don’t know what you’re going to get,” she said.

Alberta has also faced a soggy summer, with the Calgary region, for one, getting triple the average rainfall in July. There’s no sign of it letting up so far in August.

“I’d say we have a much better than average crop potential,” said Brook.

It’s a far cry from last year, when large parts of the prairies were in the midst of a severe drought and farmers were desperate for rain.

Brook said it’s too early to say what the condition of the crops will be for this year though, with farmers still trying to ward off rot by spraying fungicide and hoping that August could turn dry and sunny.

Instead, said Ontario Fruit and Vegetable Growers’ Association chairman Jason Verkaik, the province’s farmers will likely take a loss in order to stay competitive with growers from the United States or Europe.

And the upside, Tregunno said, is that fruit grown during hot, dry seasons is especially tasty.

“With these type of conditions, the heat and the sun, you get tremendous sugar content,” he said.