Tara Chammartin of La Salle Insurance & Travel Services in Manitoba was named the recipient of the 2016 Dale Rempel Award of Excellence at the Insurance Brokers Association of Canada’s (IBAC) President’s Banquet on Saturday. 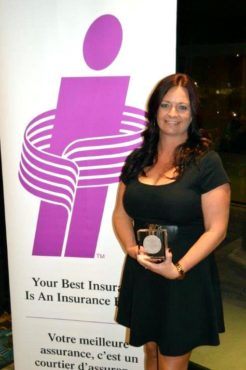 Tara Chammartin was presented the 2016 Dale Rempel Award of Excellence on Saturday.

The award, which recognizes excellence in broker education, has been presented for the past three years. “It gives us great pride to honour Dale’s memory and the difference he made to our professional development by recognizing and celebrating others who share his commitment and support of broker education,” said IBAC chair and former president Lorne Perry, in a press release on Tuesday.

Robert Harrison was officially sworn in as the new president of IBAC during the association’s annual general meeting in Charlottetown, P.E.I. on Saturday morning.

Chammartin was selected from nominations received from IBAC member associations, by an independent panel of judges representing the IBAC board of governors, practicing brokers and the insurance industry press, the association said in the release.

The award was created and named for Dale Rempel, who served as IBAC’s president from 2011 to 2012. In addition to being a successful insurance broker, Dale was also a passionate believer in broker professional development. It is in honour of Rempel’s commitment to the advancement and promotion of broker education that this award is presented each year, to an individual who has made a significant difference in the professional development of insurance brokers, IBAC said. “Tara Chammartin stands out amongst those nominated this year, as such an individual.”

“Most of you that know me know that I had a very close relationship with Dale and I had the privilege of working with him for 10 years at Rempel Insurance,” Chammartin said during the President’s Banquet. “I started with Dale in 2001 and at that time, he was IBAM’s PD champion,” she said, referring to the Insurance Brokers Association of Manitoba’s professional development. “When he decided to follow through with that at the national level and join that IBAC board, I decided to, with Dale’s encouragement and support and dedication… [join] the IBAM board. Dale was my mentor in this industry; I learned a lot from him.”

In presenting Chammartin for consideration as a potential recipient of the Dale Rempel Award of Excellence, her nominators and supporting referees spoke highly of her impressive contributions to broker education on the provincial and national levels, IBAC said.

She was one of the original members of IBAM’s Young Broker Network, she’s been chair of their professional development committee for the past eight years and counting and she has served as a director since 2009. “To top it all off, Tara is now IBAM’s newly minted president,” the release said.

Tara has also represented IBAM at many IBAC PD conferences and, most recently, at IBAC’s professional development operational review meetings. A graduate of the Canadian Accredited Insurance Broker Program (CAIB), Chammartin has taught CAIB and other courses through IBAM for several years. She has been a long-standing volunteer organizer of the PD aspects of IBAM’s annual convention.