WARSAW, Poland – Canada is deploying what the Liberal government describes as its largest sustained military contingent to Europe in more than a decade, as NATO prepares for a protracted standoff with a resurgent Russia.

In Poland, Prime Minister Justin Trudeau announced Friday that Canada will send troops and fighter jets to eastern Europe, where tensions between NATO and Russia have reached levels not seen since the Cold War. A Canadian frigate will also operate in the region.

The commitments are part of an alliance effort to show resolve after Russia annexed Crimea and started supporting separatist forces in eastern Ukraine two years ago. Tensions have since ratcheted up considerably, with eastern European NATO members worried about Russia’s intentions in the region. 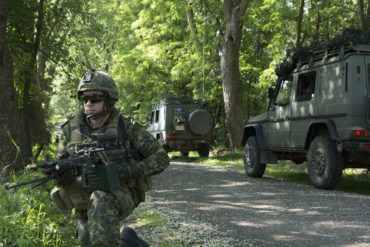 The Canadian troops will be located in Latvia, though the government did not reveal exactly how many will be deployed to the Baltic state, or how long they will remain in the country. The expectation is they will form the majority of a 1,000-strong multinational battalion, with no timeline for withdrawal.

Germany, the United Kingdom and the United States have committed similar forces to Lithuania, Estonia and Poland, respectively.

Up to six CF-18s will also be sent to Europe to help NATO patrol allied airspace against Russian threats. Canada deployed fighter jets in a similar role in 2014, but that mission ended in April 2015. The decision to send fighters comes despite the government warning that the Air Force is facing a shortage of CF-18s.

Canada has also had a frigate operating with a NATO force in the Mediterranean and Black seas since April 2014, where it has acted as a visible reminder to Russia of the alliance’s power at sea. HMCS Charlottetown recently replaced HMCS Fredericton in that role.

Trudeau made the announcement at the start of a two-day NATO leaders’ summit in Warsaw where Russia will loom large. The Liberals had promised during the election campaign to re-engage with Russia, as well as focus on peacekeeping. However, NATO allies have actively pushed Canada to take a leadership role in Latvia.

Eastern Europe allies had been asking NATO to bolster its presence in the region as a deterrent against Russia trying to destabilize them in the same way it did Ukraine. That includes crossing into their territory, inciting Russian speakers within their borders and cyber attacks. 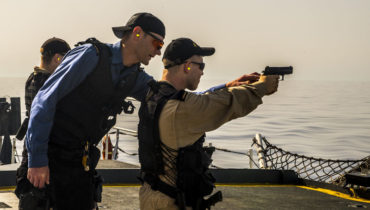 Russia has denied any such intentions, and instead accused NATO of instigating the current standoff by expanding into former Soviet territory and trying to undermine its sphere of influence. It has also warned against any military build-up on its borders.

The Conservatives and NDP have indicated they will support Canada’s contribution to NATO reassurance efforts. Some, however, fear it could make prospects for peace even more bleak, and instead contribute to a new Cold War. Germany’s foreign minister accused NATO last month of “sabre-rattling.”

Speaking to reporters before the start of the summit, NATO Secretary General Jens Stoltenberg said alliance members “don’t want a new Cold War. The Cold War is history and it should remain history.”

However, he also said the world has seen a more assertive Russia that has shown a willingness to use military force, as exemplified by events in Ukraine. Stoltenberg said that is why the deployment of allied forces into Eastern Europe is necessary.

“They will send a clear message that an attack on one ally will be an attack on the whole alliance,” he said. “I believe this approach, with defence and dialogue, is the only viable long-term approach to Russia.”

The Liberal government appears to have been hesitant to commit to the NATO reassurance effort. Both NATO Secretary General Jens Stoltenberg and U.S. President Barack Obama took the unusual step in recent weeks of publicly calling on Canada to step up and help the alliance.

In addition, a news release from the Liberal government announcing the commitment of troops, fighter jets and a frigate made no mention of Russia. Rather, the focus was on Canada standing with NATO to create a more secure world.

Eastern Europe won’t be the only topic of discussion for Trudeau and the other leaders. The fight against the Islamic State of Iraq and the Levant as well as the ongoing conflict in Afghanistan will also occupy a significant amount of time.

Trudeau will meet one-on-one with Afghan President Ashraf Ghani later on Friday, where he will outline Canada’s long-term plans for engaging the violence-racked country. That is expected to include a commitment to help fund Afghanistan’s beleaguered security forces past 2017.