WASHINGTON – The U.S. announced Thursday the first fatality in a wreck involving a car in self-driving mode, the 40-year-old owner of a technology company who nicknamed his vehicle “Tessy” and had praised its sophisticated “Autopilot” system just one month earlier for preventing a collision on an interstate. The government said it is investigating the design and performance of the system aboard the Tesla Model S sedan.

Joshua D. Brown, of Canton, Ohio, died in the accident May 7 in Williston, Florida, when his car’s cameras failed to distinguish the white side of a turning tractor-trailer from a brightly lit sky and didn’t automatically activate its brakes, according to government records obtained Thursday.

Frank Baressi, 62, the driver of the truck and owner of Okemah Express LLC, said the Tesla driver was “playing Harry Potter on the TV screen” at the time of the crash and driving so quickly that “he went so fast through my trailer I didn’t see him.”

“It was still playing when he died and snapped a telephone pole a quarter mile down the road,” Baressi told The Associated Press in an interview from his home in Palm Harbor, Florida. He acknowledged he couldn’t see the movie, only heard it.

Tesla Motors Inc. said it is not possible to watch videos on the Model S touch screen. There was no reference to the movie in initial police reports.

Brown’s published obituary described him as a member of the Navy SEALs for 11 years and founder of Nexu Innovations Inc., working on wireless Internet networks and camera systems. In Washington, the Pentagon confirmed Brown’s work with the SEALs and said he left the service in 2008.

Brown was an enthusiastic booster of his 2015 Tesla Model S and in April credited its sophisticated Autopilot system for avoiding a crash when a commercial truck swerved into his lane on an interstate. He published a video of the incident online. “Hands down the best car I have ever owned and use it to its full extent,” Brown wrote.

Tesla didn’t identify Brown but described him in a statement as “a friend to Tesla and the broader EV (electric vehicle) community, a person who spent his life focused on innovation and the promise of technology and who believed strongly in Tesla’s mission.” It also stressed the uncertainty about its new system, noting that drivers must manually enable it: “Autopilot is getting better all the time, but it is not perfect and still requires the driver to remain alert.”

A man answering the door at Brown’s parents’ house who did not identify himself said he had no comment.

Tesla founder Elon Musk expressed “Our condolences for the tragic loss” in a tweet late Thursday.

Preliminary reports indicate the crash occurred when Baressi’s rig turned left in front of Brown’s Tesla at an intersection of a divided highway where there was no traffic light, the National Highway Traffic Safety Administration said. Brown died at the scene of the crash, which occurred May 7 in Williston, Florida, according to a Florida Highway Patrol report. The city is southwest of Gainesville.

By the time firefighters arrived, the wreckage of the Tesla – with its roof sheared off completely – had come to rest in a nearby yard hundreds of feet from the crash site, assistant chief Danny Wallace of the Williston Fire Department told The Associated Press. The driver was pronounced dead, “Signal 7” in the local firefighters’ jargon, and they respectfully covered the wreckage and waited for crash investigators to arrive.

The company said this was the first known death in over 130 million miles of Autopilot operation. It said the NHTSA investigation is a preliminary inquiry to determine whether the system worked as expected. 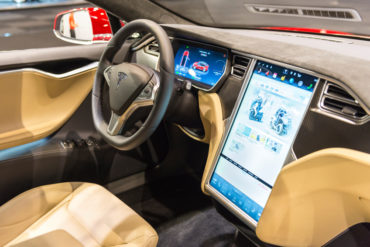 Tesla says that before Autopilot can be used, drivers have to acknowledge that the system is an “assist feature” that requires a driver to keep both hands on the wheel at all times. Drivers are told they need to “maintain control and responsibility for your vehicle” while using the system, and they have to be prepared to take over at any time, the statement said.

Autopilot makes frequent checks, making sure the driver’s hands are on the wheel, and it gives visual and audible alerts if hands aren’t detected, and it gradually slows the car until a driver responds, the statement said.

The Autopilot mode allows the Model S sedan and Model X SUV to steer itself within a lane, change lanes and speed up or slow down based on surrounding traffic or the driver’s set speed. It can automatically apply brakes and slow the vehicle. It can also scan for parking spaces and parallel park on command

Tesla conceded that the Autopilot feature is not perfect, but said in the statement that it’s getting better all the time. “When used in conjunction with driver oversight, the data is unequivocal that Autopilot reduces driver workload and results in a statistically significant improvement in safety,” the company said.

NHTSA’s Office of Defects is handling the investigation. The opening of the preliminary evaluation shouldn’t be construed as a finding that the government believes the Model S is defective, NHTSA said in a statement.

The Tesla death comes as NHTSA is taking steps to ease the way onto the nation’s roads for self-driving cars, an anticipated sea-change in driving where Tesla has been on the leading edge. Self-driving cars have been expected to be a boon to safety because they’ll eliminate human errors. Human error is responsible for about 94 per cent of crashes.

Musk has been bullish about Autopilot, even as Tesla warns owners the feature is not for all conditions and not sophisticated enough for the driver to check out.

This spring, Musk said the feature reduced the probability of having an accident by 50 per cent, without detailing his calculations. In January, he said that Autopilot is “probably better than a person right now.”

One of Tesla’s advantages over competitors is that its thousands of cars feed real-world performance information back to the company, which can then fine-tune the software that runs Autopilot.

This is not the first time automatic braking systems have malfunctioned, and several have been recalled to fix problems. In November, for instance, Toyota had to recall 31,000 full-sized Lexus and Toyota cars because the automatic braking system radar mistook steel joints or plates in the road for an object ahead and put on the brakes. Also last fall, Ford recalled 37,000 F-150 pickups because they braked with nothing in the way. The company said the radar could become confused when passing a large, reflective truck.

The technology relies on multiple cameras, radar, laser and computers to sense objects and determine if they are in the car’s way, said Mike Harley, an analyst at Kelley Blue Book. Systems like Tesla’s, which rely heavily on cameras, “aren’t sophisticated enough to overcome blindness from bright or low contrast light,” he said.

Harley called the death unfortunate, but said that more deaths can be expected as the autonomous technology is refined.

Karl Brauer, a senior analyst with Kelley Blue Book, said the accident is a huge blow to Tesla’s reputation.

Brauer said Tesla will have to repair the damage in two ways. First, the company needs to make sure its customers understand that autopilot is meant to assist drivers, not to fully take over for them. Second, the company should update the cars’ software so autopilot will turn off if it senses the driver’s hands aren’t on the wheel for a certain period of time. Mercedes-Benz’s driver assist system is among those that require drivers’ hands to be on the wheel.